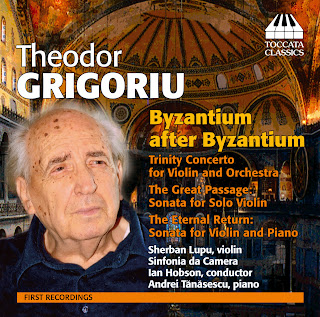 When all is said, the music a composer writes is not just the product of where he or she is from. Theodor Grigoru is a case in point. He is Romanian. Yet his music, at least the music contained in Byzantium after Byzantium (Toccata Classics 0131), hits the listener on reflection as having an overall thrust as much international/Eastern as specifically Romanian, at least to my ears.

Perhaps that is due in part to the works contained in Byzantium after Byzantium. They are thematically related in extra-musical content--as three works that meditate on what survived of Byzantine culture after its political disappearance ages ago. The composer describes it as in part the pervading persistence of Byzantine liturgical music in the Orthodox service (or more poetically, as "angels singing") and by implication the persistence of Christianity from Byzantine roots in the East and beyond. So then in this way the composer, who serves much more than the ethos of his homeland, situates himself in a wider horizon.

The series of works captured on the disk at hand began as a commission from the Trinity Episcopal Church in Indianapolis in celebration of the 75th anniversary of their rebuilt cathedral. The commission came at a time when all of Eastern Europe was being transformed with the collapse of the Eastern Block political system. Naturally change, persistence and transformation were on Grigoru's mind.

Enough of the background details. You can read all about it in the liner notes booklet that comes with the CD. In any event the first work in the series was completed in 1994, and named "The Trinity Concerto." The second, "The Great Passage," in 1999. "The Eternal Return," the final work in the series, saw completion in 2004.

These first recordings take the three works in their intended sequence, chronologically as noted above. The solo violin part is handled in rather spectacular fashion by Sherban Lupu. For the concerto he is ably accompanied by Sinfonia da Camera, Ian Hobson conducting. "The Great Passage" is for unaccompanied violin, and "The Eternal Return" is in the form of a sonata for violin and piano, Andrei Tanasescu taking the latter part.

This is highly virtuostic violin music with much in the way of expressive fireworks that have a Romanian intensity. The concerto pits this against well-conceived orchestral expansiveness of a harmonically evolved and sometimes somewhat mystical nature, with a kind of melancholy at times and much in the way of chromatic movement.

"The Great Passage" in many ways continues the musical journey begun in the Concerto, almost as a supremely extended cadenza for the violin.

"The Eternal Return" acts as a kind of reaffirmation. Violin and piano engage in some beautiful cantabile, then modern-chromatic thrusts of drama and harmonic flow and flux. It is a bristling work of inspired abandon, dissonant motion, energy and complexity.

You end up in this sequence being quite impressed with the singularity of Grigoriu as an original voice of depth and complexity. It is music that takes some time to absorb. In fact there is so much to internalize that I must admit I still need time to assimilate what he has accomplished. I do know that this is music to grow into--sublime, difficult, yet beautifully expressive.

It's a bit of a blockbuster. The performances are seemingly definitive. Lupu, the orchestra and Tanasescu excel in their interpretations of the music, especially the violinist. It is clear that Grigoriu is an important force in Romanian music, the heir to Enescu's fire, his modern counterpart, yet wholly intact in his own right. Give this one a close listen!