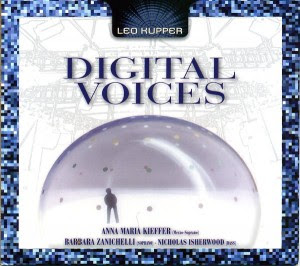 It is always a good feeling when you enter a previously unknown musical artist-composer's world and find you can make yourself at home there. That's how I felt after hearing a few times Leo Kupper's Digital Voices (Pogus 21060-2) CD.

There are six works included on the disk, one is a solo santur (hammered zither) piece played by the composer, and it's nicely done. It serves as the mid-point in the program, the rest having a particular singer showcased with electro-acoustics, natural sounds and/or instrumental foundations as a way of expressing the Kupper musical ethos.

The final three works combine live instruments and electro-acoustics to surround and complement the vocal basso richness of Nicholas Isherwood. There is good use of multi-tracking to make of Isherwood's voice a veritable almost Greek-Orthodox-Buddhist-Chant choir at times, only in a modern expanded vein. Bells, chimes and other ring-timbred sounds combine with electronics and vocal melanges in a haunting series of soundscapes.

Think of the now classic Berberian-Berio collaboration "Visage" and you get some idea of the lineage that Kupper's Digital Voices extends out of and innovates within. There are written vocal parts at times which the singers extend with their own vocal elaborations; and abstract vocal expressions that follow guidelines mapped out by the composer. The vocal results are manipulated digitally to various degrees and integrated into the electro-instrumental digital matrix created by Kupper for each work.

"Tour de force" is a critical phrase used perhaps too often these days, but I do not hesitate to use it for Digital Voices. These are landmark works for the most part, a triumph of the human voice holding its own, flourishing in a world of machines and digital automata. Kupper has created a series of works that embody the ultimate triumph of the human spirit over the human-made creations that threaten to envelop and enslave it. Yet Kupper's digital world in no way embodies the impersonality of automata. Rather it is a naturally flowing series of landscapes in sound, all expressing something very human. Beautifully done, enormously enriching, psyche-boosting music. Kupper gives us that and very poetically, too.