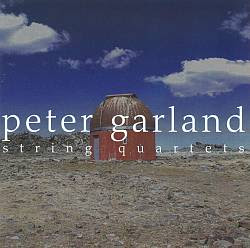 When you listen to Peter Garland's first two String Quartets (Cold Blue 0031), as played by members of the new music group Apartment House, you enter a world you feel you've been in before, but something has changed. It's what he calls "radical consonance," which helps you get an idea of what's in store, but as a thumbnail only. The years he's spent with Native American, Mexican and Southwestern American music does also give you some idea of influences, and yet these quartets do not particularly emanate in ways that would point in those directions.

The music often has a largo-esque, dreamy quality. There is a kind of primal archaicism of simple rural Americana or ages past--not really like the shape-note hymns that were a part of early American Colonial musical life and survived in various permutations in rural areas. Not really and yet there is something non-academic about the voicings and harmonies that follow a path of earthly "unschooled" expression like that. And yet it is a Garland sound and feel. The second quartet is a bit more complex rhythmically and sonically, yet both works work together to give a unified impression/expression, at least to me. And it is the sure hand of Garland that constructs a world that is not truly archaic in that the music is written in the full light of our present-day musical consciousness, and so there is a meta-presence there, so to speak, that generally would not be in some earlier musical expression of this kind, made for unselfconscious social music making in a local place. That is inevitable and not necessarily a bad thing, of course.

These are highly original, very moving, beautiful works. They have their own logic, primal but transcendent. If it's post-anything, it's also pre-post-anything as well. What's important is the listening experience. You tend to savor each intervalic expression, each harmonic foundation as somehow looking back, forward and inside the memory-self to a place that gives us pause, brings us to a place before most everything was what it is today or when it will be what it currently is not. It's music that is the opposite of a cell phone. It does only one thing. It doesn't add things to the one thing but continues the thing until it has been made existent. . . then it goes on . . . to do another thing something like the first thing without being in any way identical. So there is nothing in the way of classical form going on here that I can discern, nor is there a collage collation of many things getting short spaces to be themselves. It's not either.

These are landmark string quartets of our current era. Very highly recommended.