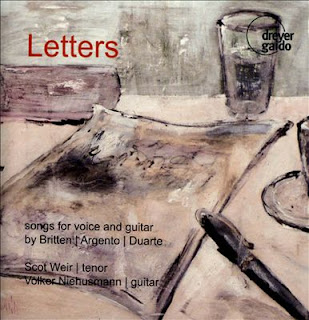 Lieder for voice and guitar are relatively rare in the modern repertoire. Guitarist Volker Niehusmann and tenor Scott Weir have put together a nice collection of them, with Benjamin Britten's song cycles "Folksong Arrangements" and "Songs from the Chinese, op. 58" and one each by Dominick Argento ("Letters from Composers") and John W. Duarte ("Five Quiet Songs, op. 37). All this on the CD Letters (Dreyer Gaido 21078).

Weir has an elocutionally exact, powerful bell-like tenor with the sort of finesse of a Peter Pears. This makes him especially suited for Britten's songs, but no less effective with Argento and Duarte. Niehusmann is impeccable in executing the guitar parts, which necessarily have an accompanying role and do not tend to seek the spotlight. They tend however to be quite artful in construction.

The Britten cycles contrast, yet each exemplifies the composer's stylistic concerns--the "Folksong Arrangements" accentuating the rustic old English side Britten spiced his operas with, the "Songs from the Chinese" favoring the abstract declamatory side so prominent in much of his vocal work. They will satisfy the thoroughgoing Brittenite and novice alike.

Argento's cycle is most unusual in that it uses as text letters written by Chopin, Mozart, Schubert, Bach, Debussy, Puccini and Schumann. Both it and the Duarte cycle have a straightforward yet contemporary quality that go well with the Britten.

All in all this is very well done and rather exotic fare. Britten, guitar and contemporary lieder enthusiasts will have much to savor with the CD. Recommended.