The Crossing, I Want To Live, Contemporary Works for Women's Choir 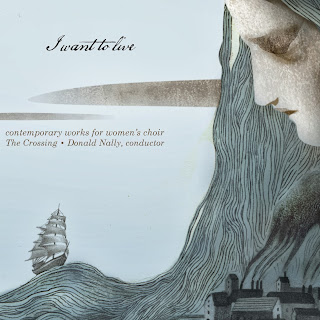 Contemporary music has come some distance in the new century and the few decades preceding it. One trend is centered around tonal musics to be had nowadays that aren't doctrinaire neo-romanticism or typically minimalist in a mesmerizing sense, though repetition may be a factor. You can hear some of it in a somewhat unusual release by the women's choir known as The Crossing, conducted by Donald Nally. It's a collection of works entitled I Want to Live (Innova 856).

The choir is very good, the soloists quite adequate but the overall ensemble the strongest element. They come forward appealingly in a program of short works, some grouped in multi-part sets, by David Lang (of Bang-on-a-Can fame), William Brooks, Paul Fowler, and Pelle Gudmundsen-Holmgreen. "I Want to Live" is one of five interrelated Lang works, Brooks is represented by "Six Medieval Echoes," Fowler is represented by two short works, and Gudmundsen-Holmgreen by the eight short segments that make up "Statements". The music was written between 1970 and 2010, with the bulk from the present century.

There are at times hints of an early music influence (especially the Brooks suite) and a minimalism where recurrence is not as pulse-periodic as it is stanza-like in a more song-like conceptual framework, or gradually unfolding in short bursts of melody.

It is music of high interest performed with a gently spirited or more stirring presence as called for. It is a very good example of the "new tonality" to be heard today, helping reserve a rightful place of the style alongside other stylistic currents in new music right now. It is a very good listen in any event, atmospheric and evocative, sometimes overtly emotive but consistently introspective-atmospheric.