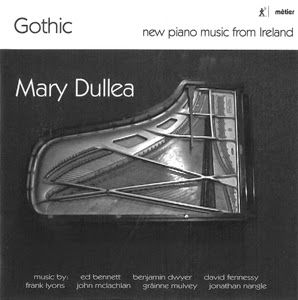 If we in the US have not heard very much from Irish contemporary composers, it is not because there is not much happening. The Irish are a most music of peoples, of course, and it stands to reason that we have been deprived for non-musical reasons. All that is moot with the new album by Mary Dullea: Gothic: New Piano Music From Ireland (Metier 28549). Ms. Dullea shows that she is an excellent exponent of new music performance in this sparkling anthology of seven works by some of Ireland's finest.

The music tends to be dramatic, gestural, filled with light and shadow, sound and silence. The music has the sort of ambience, much of the time, that George Crumb brought to prominence in some of his landmark solo piano works. The works here do not copy Crumb but step ahead with the same sensitivity to in-and-outside the piano color fields, dampening of strings, strumming and plucking strings, the use of space.

All the works have a singular feel to them, modern in a colorist's conception more so than much of the the wide skips and beyond-tonality of classic high modernism, even though some are harmonically-tonally edgy. Mary Dullea is in command and brings us performances that give us the music in its full mystery and vibrant narrative, sometimes torrential but always lucidly new.

These may be composers whose names you do not know (though some you might) but each has something worthwhile to say. The program consists of Ed Bennett and "Gothic," David Fennessy and "the first thing, the last thing and everything in between," Jonathan Nangle and "grow quieter gradually," Frank Lyons and "Tease," John McLachlan and "Nine," Grainne Mulvey and "Etude" and finally Benjamin Dwyer and "Homenaje a Maurice Ohana."

The music puts you firmly in the present without any sort of dilution. This is serious piano music and it is played with a touch of the magic that Mary Dullea has no shortage of....She is transcendent, powerful and tender all at once.

It turns out I have jumped the gun posting here. Copies will be available February 10th, 2015. Keep a note of the date; you will no doubt want to order it when it’s released.