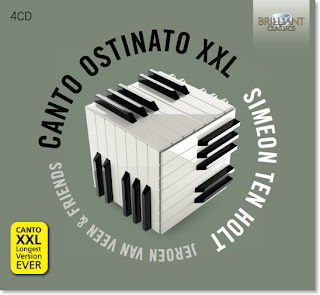 Minimalism has had its ups and downs in our era. But if you think you know all there is to know about it, as I occasionally do (wrongly), there is something that will change your mind. I found an experience like that when I recently was sent the 4-CD version of Canto Ostinato XXL, a composition by Simeon Ten Holt (1927-2012). This version is played by four grand pianos and a full cathedral pipe organ, by Jeroen van Veen and Friends (Brilliant 94990 4-CDs). The work was written between 1976 and 1979, for four keyboards, give or take. There have been a number of recordings, from what I understand. This is by far the longest version, running well over four hours. Though I have not heard the other recordings I certainly can vouch for this one. Its lengthy playing time may make it difficult to hear in one sitting but that is no matter, at least to me. You lose nothing by dividing the hearing up into segments.

Fact is, it is a very beautiful work in the hands of van Veen and company. This is apparently the first version to bring in organ with four pianos and the results are excellent. 106 individual sections can be played for any length of time as desired. Each section generally contains a two-bar ostinato diatonic figure foundation in 5/4 and there are melodic thematic elements that can and do appear overtop the ostinato. There are segues that appear only once as transitional bridges. Some choice is given the performers on what to play and what to leave out and other parts can be added as seen as fitting by the players for their given version.

I am not entirely clear in my head how all that works but the hearing of this version lays it all out so that it doesn't matter. What you get is a beautiful work that has trance elements as well as melodic figures that are far from banal. In that sense there is a Riley-Reichian mesmerizing flow as well as the Glassian melodism. But really this sounds like neither, for Simeon Ten Holt goes his very own way. There are passages of such beauty that you feel like this might have been the minimalism you would hear if Chopin were alive today. But even that does not do justice to what occurs in the music.

The organ appears dramatically and selectively at key points in the work. Much of the time it is the four pianos alone. That only makes the organ's presence all the more special when it appears.

It is a work that needs to be heard by anyone attracted to minimalist structure. I would be so bold to say it is one of the masterpieces of the first minimal period, though I have never heard it prior to this set. The version is quite ravishing, with Jeroen van Veen, Sandra van Veen, Marcel Bergman and Elizabeth Bergman resplendent for the piano parts; Aart Bergwerff very effective on organ.

I can't imagine a better performance, though no doubt there could be ones that sound different given the leeway the composer builds into the work. At the Brilliant budget price the 4-CDs come to you without breaking the bank and time goes surprisingly quickly when you hear this performance.

I must say the music moves me very much. No minimalist collection is complete without it, I would say. Very stunning work.