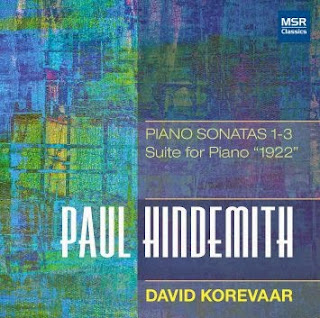 When I was in school I learned that there were two conflicting views of history: the "big man" approach, that looks at major changes as the result especially of important persons. So the Civil War narrative might be centered on Abraham Lincoln and perhaps Ulysses S. Grant, the civil rights movement as a product of the courage and charisma of Martin Luther King, etc. The opposite theory looks at the many little cumulative changes made by lesser personages or the popular ground swell that favors a particular change. Both have their uses, of course. You can see the rise of modern music in terms of the seminal influence of Stravinsky's "Rite of Spring" or you could see it as a product of many more and more chromatic works that preceded and followed it, culminating in a modern tonality. There should not be only one way to see things. And of course these days a "big man" view might involve an important woman.

If Paul Hindemith's Piano Sonatas (MSR Classics 1507) (1-3, written in 1936), do not quite have a "big man" status in the development of modernity, they nonetheless form a masterful body of work that helped set the pace last century, and they are works of considerable worth and drama. Hindemith may not have had quite the impact of a Stravinsky, but his influence in the first half of the Twentieth Century was nonetheless not inconsiderable.

A new recording of his three sonatas 1936 plus his piano "Suite 1922" gives you all the music as interpreted by the talented and very sympathetic pianist David Korevaar. This is music that is by no means easy to play properly, but David is fully equipped and beautifully interpretive, and so is able to breathe genuine life into the works. As with many vintage Hindemith works from the period, the music has a striking thematic-harmonic quality to it that stretches out into beautifully developed long-form structures you come to welcome on repeated hearings as you would an old friend.

I have not heard better performances of these works. They are milestones in Hindemith's output and Korevaar understands them completely. They will give the Hindemith aficionado plenty of joy and they will serve to introduce his music to those unfamiliar in the basking illumination of sympathetic interpretation. They are works that should be heard by anybody interested in the modern movement, and the performances are exemplary.