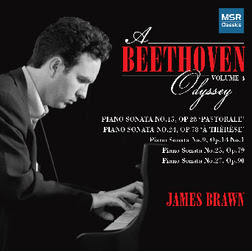 A collector of recorded classical music, modern or otherwise, is a particular sort of person, someone out of the ordinary. I suspect the avid collector of such things would not find "streaming" very satisfying. That is in part because a physical collection, whether CDs, LPs or what-have-you, has an aura about it. It expresses the collector's musical personality. Visiting avid collectors over the years, I have always been impressed by the display of what the person has. It is impressive first off by the sheer mass and the way it is organized, like books, ordinarily in a series of horizontal stacks. Someone who has a great deal of, say Beethoven, will most likely group them together in some fashion, so that of course the collector can easily retrieve a particular item at will for listening. But also because the interested visitor can gauge the extent of the holdings of particular sorts. "Wow, look at all the Beethoven!" one might exclaim on seeing it all grouped together.

Now this transactional accumulation as an extension in space is not peculiar to music collectors. When I was studying anthropology in Chicago I did a research presentation about a tribe in Highland New Guinea and their pigs-for-yams exchange festivals. There was an open ceremonial ground where each exchanger was allotted a vertical row. Every time a "big man" initiated an exchange he was awarded a stake. The winner of the sequence, the biggest man was the one with the longest line of stakes. The stakes were a projection of the status of the winner, the one with the longest projection into space of self if you like.

Why collectors will probably never be satisfied with streaming has to do with that physical presence of albums. They have the very concrete accumulation of endless stacks as the visual correspondent of their commitment to have much music in their lives. It gives them status as collectors and it shows anyone who looks what kind of music lover they are. Like anything that takes up physical space, though, there is a point where the collector must make choices. How much Beethoven do you need? At what point do you stop?

With that long introduction I introduce Volume 4 of pianist James Brawn's A Beethoven Odyssey (MSR 1468), comprising eventually a complete recorded set of Beethoven's monumental series of Piano Sonatas. Anyone who knows the last 100 years of classical music recordings knows that there are fair number of such complete recordings, some with great pedigree, others less so. I have musically dwelt in the realms of a number of them. Almost all of them have something about them that sets them apart. Some are hard charging with romantic supercollider thrust, even at times to the point of sloppiness, some seem especially good for the later, most celebrated sonatas but do not give the lesser-known works as much care and attention.

So what sets James Brawn's set apart, so far? He performs every sonata observing all repeats, for one thing. This in effect makes every sonata stand out as a significant effort on Beethoven's part. It equalizes in part the relation of the bonifide "masterworks" with the lesser-known, allows the listener to contemplate each in its own right. The volume 4 contains sonatas nos 15, 24, 9, 25 and 27. And like the other volumes in the set each is given a very well-balanced reading, warm and dynamic as called for but also with a classical feeling of balance between the affective and the intricately brilliant structure of each work.

In this way, then, Sonata No. 9 is not a preliminary to the later, more innovative sonatas. All are performed with care, with an execution technically proper and musically sound, expressive of where Beethoven dwelt musically at each point in time.

James Brawn, so far in the cycle, gives us the sonatas in readings that seem right for the times we live in. They are not unmindful of the contrasts and dynamics as Beethoven must have imagined them in performance, but they are not the super-romantic potboilers of yesterday, wearing heart on sleeve for an audience that demands grandstanding.

So if all goes according to plan the final complete set gives us a Beethoven for our contemporary-modern sensibilities, fully mindful of the lyrical and structural, the impassioned and the balanced, without overdoing any one element.

So in answer to the collector's worry about when to stop accumulating complete Beethoven piano sonata recordings, my answer would be that the Brawn set is so nicely unassuming, so true to bringing out Beethoven in all his glory, that you probably should have it, even if you already have a number. For the novice, too, this is a nice one to learn the ins and outs of the complete Beethoven for piano. I do recommend it. Brawn gets inside Beethoven as we would wish to hear him today. Bravo!