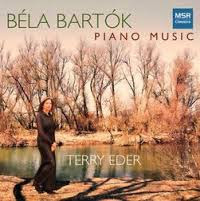 The influence and importance of Bela Bartok (1881-1945) is still being felt and experienced in the contemporary music world. As if to remind us of music sometimes a bit overlooked, pianist Terry Eder gives us a volume of select Piano Music (MSR 1410).

The album makes an intelligent presentation of works that exemplify Bartok's extensive involvement with and modern transformations of the folk music of Eastern Europe--here Hungary, Romania and Bulgaria.

The music opens with the landmark early expression of his folk-inflected modernism, the op. 6 "14 Bagatelles" of 1908.

This is music of great verve, ingenuity, originality and a rooted contemporarity that continues to communicate to us.

Pianist Terry Eder gives us a sparkling interpretation of these pieces, with an open rubato that expresses the free invention of the Bartokian musical mind more than sentiment, and an irrepressible rhythmic verve on the folk dance liveliness of the peasant-rooted material.

In the end we have a Terry Eder who revels in this music, getting inside it and affirming how it speaks very much to us in the new century. It is a beautiful panorama of the playful pianism of one of the shining stars of the twentieth century and forefathers of the present day. Terry Eder shines too in her interpretations. This is a treat for the ears! Hear it and open up to the fun and adventure of Bela at his most earthy. Recommended.