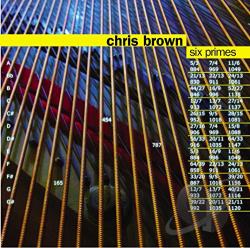 The well untempered clavier is alive and well in the form of Chris Brown's solo piano series Six Primes (New World 80781-2). The six pieces are based on just intonation--the prime number ratios 2, 3, 5, 7, 11, and 13 are utilized varyingly for tuning and temporal structure according to the piece at hand.

The music takes a bit of adjustment on the part of your ears and then takes hold. Much of it sounds vaguely Indonesian--principally due to the sound of the scales as created by Brown. The composer in the liners gives us a full scope of the influences that went into the music: "Lou Harrison's endlessly branching melodies, Cowell's polyrhythms and tone clusters, Cage's equanimity and Stockhausen's deterministic force, the complex minimalism of Morton Feldman and the harmonics buzz of Ellen Fullman....And although I never thought about it during the composing process, I think I hear in its mixture of styles an influence of Ives." All this makes sense to me as I listen, though I do not believe I am familiar with Ellen Fullman's music.

One is never bored with these pieces--they are consistently inventive and the tunings bring continual difference to the ears. It is new music in a very new world context, or in other words it sounds as a natural expression of a world beyond our traditional Western one, which is fitting to the lineage of composers Chris Brown cites as influential. And in the end the music has its own trajectory that takes it beyond influence and into a music unto itself.

I find it all fascinating and substantial. Anyone with an interest in microtonal and post-classical forms will respond to this. Anyone with a sense of musical adventure in general will also get much out of this CD. It is important as a furtherance as well as lively and interesting music on its own terms. Very recommended.