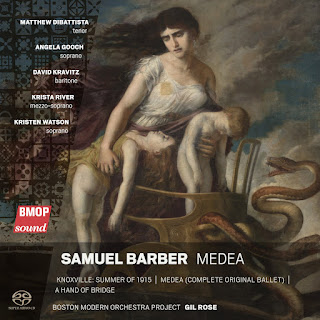 When you look back on how you discovered certain composers when younger, sometimes you find it was nearly a matter of chance. When I was young and first exploring the wide expanses of regions, composers, stylistic schools and periods,    , budget labels and cutouts most certainly allowed someone with limited resources like me to take a chance on something unknown and not empty my pockets at the same time.
In this way I came to appreciate American composer Samuel Barber. One first exposure was Charles Munch and the Boston Symphony Orchestra performing selected parts from his ballet Medea and another was a budget recording of his Knoxville Summer of 1915. Munch's "Medea" was a wonder. "Knoxville" was a decent enough version to get the idea, though I've forgotten who did it. I had to sel;l it before heading off the graduate school in 1981.

By the time I had absorbed both these works/performances I was impressed with how Barber managed to create very memorable New Music while in his own way acting with originality and verve in a Modern-Romantic mode. That I heard but could not put a name to it until I read about him in a Contemporary music monograph.

As time has passed these two works have lightened my days considerably the more I continued to listen. And as time went by I subsequently embraced his "Adagio," his Violin Concerto, etc. Happily in Barber for me was a very lyrical voice that did not sound retrograde or old fashioned. He was his own outstanding self and I was happy to find this out.

So I was glad when I heard that Gil Rose and the Boston Modern Orchestra Project had released a volume of Barber gems, namely the complete score of the ballet Medea, a new recorded version of Knoxville with soprano Kristen Watson, and then a ten minute mini-operatic work "A Hand of Bridge" from 1950.

The performance of "Knoxville" leaves nothing to be desired. It breathes in yearning memory of a time past, yet basks in the light of the timeless beauty of summer magic. It reaffirms the highly engaging, vivid enchantment I felt on first hearing the work. BMOP show us a present-day balance that only serves to increase our feeling of timelessness. Wonderful.

The complete "Medea" in nine movements brings to us a relevance I originally felt on the Munch excerpt, perhaps with a bit less fire that the old recording but then with a nicely Apollonian central balance that gathers the total together in all nine movements and gives us a full earful of the evolving totality, the wholeness of the complete version.

The bonus 1959 "A Hand of Cards" has a nice expressivity to it and makes us appreciate further Barber's natural affinity for vocal writing.

All told this gives us carefully involved, painstaking versions of the works. They bear up on repeated hearings, giving us a Barber that sounds as fresh today as the days when he first wrote these masterful works.