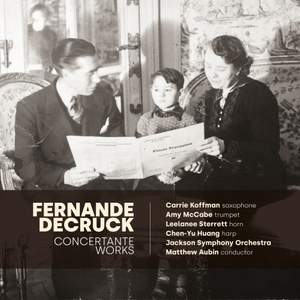 If you asked me before I went to the mailbox the other day who was Fernande Decruck, I would have said I had no idea. But here we are a few days later and I have been listening to the album of her Concertante Works  (Claves SO-3056) some in premier recordings, some in premiere performances. She is a she, first off, which explains in part why maybe you've never heard of her? Women and Jews, according to some in the earlier days, supposedly did not make good composers. Well that turned out to be utter nonsense, of course. So to further debunk that myth here is the music of Ms. Decruck, who was French, born auspiciously enough on a December 25th, 1896 and leaving this earth on August 6, 1954.

The album is one that takes a bit of patience to start with. After a while it begins to get through to your ears, to have a cogency, a definite French evocative sense of melodic form. She is not quite Ravel or Debussy-esque. But then she has her own lyrical sense. It is a happy discovery if you give it a chance-- well played by soloists and the Jackson Symphony Orchestra conducted by Matthew Aubin.

The album has three concerted-like works for solo instruments and orchestra. She apparently wrote quite a few works for saxophone, including the opening "Sonate et un diese pour saxophone (ou alto) et orchestre."  Also well worth your ear time is the "Poem Heroique" for trumpet and orchestra and finally the (to me) especially charming "Concerto pour harpe et orchestre."

Strongly recommended. Give it a listen by all means!