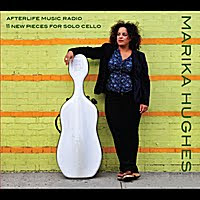 Marika Hughes has put together a program of 11 new and newer pieces for unaccompanied cello, Afterlife Music Radio (DD001). It sounds on occasion as if there may be just a little overdubbing going on, but otherwise, there is Marika, her cello, a few microphones and your ears involved.

Marika tends to play with a modernist vibratoless attack, but she is quite expressive on a dynamic and timbre-variational level. Of the composers, I recognize one from the jazz world (Nasheet Watts). Beyond that the names are not familiar to me. This of course does not mean anything in itself, except perhaps the new music is provided in part by new or new-ish composers.

What counts though of course is the music and its performance. Marika comes off well and the program has a sometimes bittersweet stoicism that suites the new millennium in many ways.

Listen and revel in the rich tone of Ms. Hughes' cello.
Posted by Grego Applegate Edwards at 4:27 AM