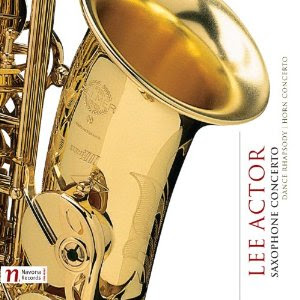 Anyone familiar at all with jazz knows that the saxophone has in the last 120 years come of age. Yet in the classical field the saxophone figures less often in the scheme of works than might be supposed. This is not the place to examine why that is, but to appreciate its appearance and make note of it as appropriate.

So for example there is a recording out this year of Lee Actor's Saxophone Concerto (Navona 5848). Debra Richtmeyer is the alto saxophone soloist; Kirk Trevor conducts the Slovak National Symphony Orchestra. It's essentially a neo-romantic/proto-impressionist work of some lyrical and lively qualities. The solo part is alternatingly sinewy and plaintive, with a slight vibrato which recalls the sound of the saxophone on "Pictures at an Exhibition" and "Le Creation du Monde", or of course Debussy's "Rhapsody for Alto Sax and Orchestra." In other words the sound is a bit enmeshed in jazz sax style of the '20s and '30s. Once one accepts that, there is an engaging charm and memorable melodic thrust to the piece.

The CD contains a number of additional works by Lee Actor. The most attractive are the "Dance Rhapsody" and the "Concerto for Horn and Orchestra," with the latter featuring the Slovak Radio Symphony Orchestra and horn soloist Karol Nitran.

It's cleanly orchestrated, decently played music that hearkens back to the early 20th century with enough economy of means that it does not take on the monumental bloatedness of some typical late romantic works (the latter of which I do appreciate when done well), yet it's not quite neo-classical and it does not fall into a typically modernist camp either. There are some nascent impressionistic elements, and what one could call modernist-tonal-conservative elements.

The music is solid fare, decently performed. If one gets the feeling one has heard similar music before, of course that is a truth. This music has some originality in the details and some heavy ties to early modern tradition in its overall thrust.

It will no doubt please those who like a sort of souffle of earlier pre-modern/modern styles, well crafted. The Saxophone Concerto stands erect in a field where there are not many challengers. The other pieces are solid and welcome additions. This is not paradigm-changing music. It is quite enjoyable in its own way.
Posted by Grego Applegate Edwards at 4:54 AM