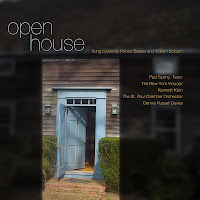 Two song cycles come our way on Open House (Innova 815), written by two American composers of stature, both with texts by contemporary poets, both sung by Paul Sperry.

Robert Beaser's "Songs from 'The Occasions' of Eugenio Montale" (1985) has an affinity with Samuel Barber's music, though it has its own original stamp. Nobel Laureate Montale's text deals poignantly with personal loss. The chamber group builds an enchanting edifice to support the tenor solo, and the result is vivid aural-imagery.

William Bolcom's "Open House" (1975) centers around seven poems by Theodore Roethke, with whom Bolcom took a class in his student years. Bolcom has an eclecticism all his own and in this case it comes out with tone painting of extraordinary depth. The Roethke poems express the experience of a life in poetic terms, and work well as the basis of the song cycle. And Bolcom is at his best.

This is excellent fare that will captivate anyone with an ear for modern music.