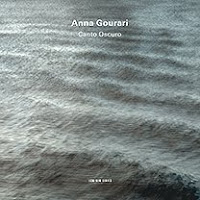 Anna Gourari brings us a full-length recital of some disparate yet organically related solo piano works on her Canto Oscuro (ECM New Series B0017622-02). At first I thought, "that's a very wide-ranging program, but why did she choose these pieces?" After listening a few times I realized that her abundant artistry, her personal intuition and creative impetus brought her to this particular combination of works.

Essentially there are four Bach pieces rearranged for piano--three by Busoni and one by Siloti--framing two pieces from the modern era, Gubaidulina's "Chaconne" and Hindemith's "1922" Suite fur Klavier.

In sandwiching two modern pieces that relate to Bach in tangential ways for the most part she causes us to reflect on Bach's timelessness--he is modern, he is not. And through her artistry she makes Gudaidulina's and Hindemith's modernism take its place alongside Bach as of a piece, following out of Bach yet not in any direct sense.

This sort of inevitability and continuity in disparity I at least felt after I listened a number of times straight through the program. The Busoni-Siloti reworkings of the Bach to greater or lesser degrees (depending on the piece) bring Bach's music genius in line with post-Lisztian pianistic expression. And Ms. Gourari handles it all wonderfully. Conversely the modern pieces are played with such singularity of vision that they sound more transcendent of the era than they might in other hands.

These are all pieces of substance. Gourari is authoritatively assured, fluid and striking in her realization of dynamics and the spectrum of touch modes she brings into the music. This is pianism of a very high caliber. This is music very much worth the effort and artistic expression she gives to them. This is a program that hangs together unusually well, showing us how Gourari can bring together an unusual sequence of works and make them fit together nearly perfectly as a whole. It's a rather glorious achievement. It is a disk I will prize for years to come and no doubt listen to again many times.

Posted by Grego Applegate Edwards at 6:31 AM