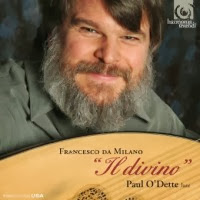 It occurs to me that lute music, Renaissance or Early Baroque, composed by a master and played well, is something I simply never tire of. I suppose that's also true of music for the viola da gamba. Be that as it may I have found much pleasure listening of late to a particularly good collection of solo lute music by the Renaissance master lutenist Francesco da Milano, nicknamed in his day "Il Divino," which sounded a bit much to me until I heard Paul O'Dette's fine recording (Harmonia Mundi). Now I am ready to hail Il Divino as well, at least by a short obeisance in front of my stereo while the CD is playing. I dare say the chances of actually running into the fellow are slim nowadays. But thankfully we have his music.

Da Milano was to the Italy of the period the lute composer of choice. Paul O'Dette has arranged the various works on the album into a series of suites consisting of a ricercar, a fantasia, and one or more Da Milano arrangements of popular songs of the day. It makes the music flow marvelously, not more so though than Maestro O'Dette's beautifully fluid playing. Two-part contrapuntal lute passagework, with which Francesco's writing abounds, is a marvel to hear in Paul O'Dette's hands (and fingers).

It is music of high sophistication yet direct charm. Paul O'Dette and his lute have enchanted me on this disk, and I am sure will continue to do so for many years to come. You should give this one a serious listen. It should grab you whatever your background.