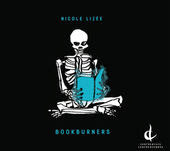 When you think postmodern, the "anything goes" idea can have something to do with it. New instrumental combinations, new technologies, a return to tonality, though this does not always imply classical tonality, an eclectic approach to form, a disregard of separating "high" and "low" and, sometimes, the incorporation of found elements. All that serves to introduce to you Montreal-based composer Nicole Lizee and her recent CD/DVD Bookburners (Centrediscs 20514).

Ms. Lizee brings to us a full palette of sound colors and effective pomo compositional ideas, at times embodying the idea of "glitch," which involves utilizing older audio technologies in ways that involve either their intentional malfunctioning in controlled situations or their appropriation for uses they were not intended. The advent of the turntablist is an example that is widespread and needs no explanation. Nicole makes creative use of turntable virtuosity in her works at times.

The most spectacular example is the duet between a turntablist and an electric cello on the bonus DVD, for the title "Bookburners." There is here an ingenious use of selected repetitions of record sequences as motives to launch the overarching cello part. It is lyric and impressive.

"White Label Experiment" pits So Percussion with Ms. Lizee on turntables and omnichord for an adventurous environment of sound that hangs together as composition. "Ouijist" is a chamber work that haunts in its mix of alto flute, violin, double bass, omnichord and spectres.

"Son of the Man with the Golden Arms" uses percussion quartet, two electric guitars and solo drums to create a kind of exploded rock virtuosity, shards of rock identity and splinters of sound hanging together in a disjointed but very musically fascinating way. The drum part is tough but beautifully executed by Ben Reimer.

Finally we have from the DVD "Hitchcock Etudes" for piano and glitch. Soundtrack music and dialog are torn apart and reassembled in a disjointed melange that corresponds with Hitchcock film clips that are similarly treated in a synchronized way with the music to form a complete audio-visual glitch. On this one the seeing of it all adds a crucial element. I am not entirely sure that the audio alone would be nearly as effective. But that's the point, I guess.

In the end we have an impressive compositional program of music that stands out as exceptional, original, brittle and speaking to the sounds of the malfunctioning technology around us, turning it into art rather than the sort of cursing episodes one might find oneself in when you expect Aye-to-Bee continuity from your equipment.

She is an original, both lyrical and disembodied, innovative in her minimalist deconstruction, thoroughly a voice of today. An original voice in full-flower, in fact.