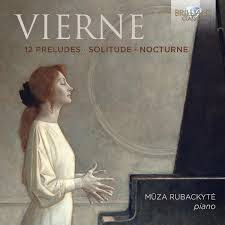 Luis Vierne (1870-1937) is best known of course as a key figure in the French symphonic organ school that followed in the wake of Franck. But what of his other music? It turns out that around two-thirds of his output is not for organ, but rather come to us as song cycles, orchestral, chamber and piano works. Some of those solo piano pieces are aptly performed on a recent release 12 Preludes, Solitude, Nocturne (Brilliant 95154) by Muza Rubackyte.

I suppose it should come as no surprise that these pieces have a post-Lisztian, pre-Scriabinesque sort of feeling to them. They are sometimes rather demanding technically, fully flourishing late-romantic, pre-modern showcases.

Ms. Rubackyte is well-disposed toward the works and temperamentally right for the rolling arpeggios and melodically expressive nature of them.

These were all composed around the time of WWI.

They are all generally through-composed, fantasia-like works that have structure, a feeling of spontaneity and a fair amount of chromaticism. Once you realize that these are mature-period Vierne works (assuming you know his organ music) it does make some stylistic sense. If he had written these for organ there would be of course less late romantic flourishes typical of the piano in the day and then the structure and harmonic forms taken on would seem typical of Vierne the organ master.

The fact that they are most idiomatically pianistic is fitting, but in other words this is not a radically different Vierne, but rather a consistent one that adapts to pianistic means to express what he has in mind.

The four movements of "Solitude" and the concluding "Nocturne, Op.35, No.3" are the most poetic of the pieces here, at times less virtuoso-oriented, at times the most moodily chromatic, sometimes almost impressionistic. And so I find myself especially attracted to them.

But all-in-all the entire program has music that is far from uninteresting; it is very well played and worthy of your ears. Those who appreciate Vierne's organ music will find these pieces especially interesting. It may not be an essential disc for those not already familiar with Vierne, but it sheds more light on his place in the early modern music world while also providing the listener with some very good piano music.