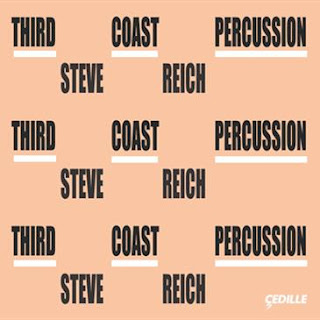 Time passes on and we are celebrating the 80th birthday year of the extraordinary minimalist composer Steve Reich. The very capable group Third Coast Percussion rings out to mark the occasion with an album of some of his gems for pitched percussion, simply entitled Steve Reich (Cedille 90000 161).

Reich's enormously influential and enthralling work with interlocking, evolving rhythmic-melodic patterns has never been topped via his music for mallet percussion groups, though it has of course been equaled by other mixed and completely different instrumentations. Third Coast Percussion concentrates on some of the mallet gems: the "Mallet Quartet" (2009), the "Sextet" (1985), which adds two pianos to the mallets, "Nagoya Marimbas" (1994) for duo, and "Music for Pieces of Wood" (1973) which for this performance they selected and pitched five thick slabs of purpleheart wood, played on their edges with large dowels.

The latter is probably the definitive recording, the others rival and equal others. As a result this volume is excellent, essential and breathtaking, given the landmark quality of the pieces.

Marimbas and vibes, the sounding of metal and wood, are signature Reichian means that have spurred him on to produce some of his most articulate structures in motion.

And in surveying these works the various approaches to the dialectic between repetition and change, so important to the continuity of his work, are nicely on display, from the additive entrances and exits of the wood piece or the abrupt but coherent shifts in "Sextet." The consistently present flowing organicism allows Reich to create long forms from divergent contrapuntal elements influenced by Gamelan, African ensembles, jazz and other sources. Most importantly they become brilliantly restructured constructions of pattern and transformation that in part make Reich so innovative.

And really, other than the sheer aural pleasure of his music, that is one place where we might pinpoint what makes Reich so special. In any other hands before there was Reich the world sources were borrowed nearly piecemeal or built up out of, to metaphorize, large blocks of sound fitted together like a rubix cube but essentially imported whole, in chunks. This may be a simplification, but Reich's version of minimalism was all about how to take all that apart and rebuild from the ground up, in each case finding brilliant ways to make the music process and the important element of change seem perfectly inevitable with his transformational techniques. He solved the problem of how to make change a contrary force to sameness, and to make that all work beautifully. His solutions allow us to hear mesmerizing repetitive patterns that remain of high interest over time by never staying in one place for too long. And in that way he influenced all who came after. One might argue the Riley's "In C" faced the same problem in other equally innovative ways, and so we might place the two-side-by-side as the primary movers of the music and what came after.

And ultimately the brilliance of Reich is that one never feels like one is subjected to patterns that follow one another willy nilly, but instead seem like the unfolding of a single organic whole. Combine that with the brilliance of invention of the elements themselves and how they interact and you have music that one never wearies of, no matter how many times one has heard it.

Third Coast Percussion gives us some beautifully exemplary performances fully worthy of the 80th birthday year. Remarkable works, played remarkably well. Everyone should hear this album, this music. Reich is one of our greatest treasures!