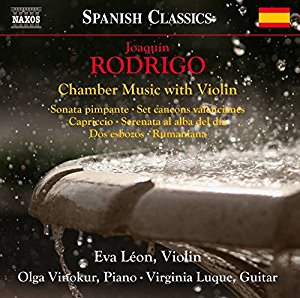 The Spanish master composer Joaquin Rodrigo (1901-1999) is universally known and admired for his "Concierto de Aranquez," most deservedly so. But during his long lifetime he wrote a good deal else, and we can be thankful to Naxos for releasing a good bit of it. Today we have the latest, Chamber Music with Violin (Naxos 8.572648), which showcases the extroverted Eva Leon on violin, in one unaccompanied solo work, one work for violin and guitar (Virginia Luque) and four works for violin and piano (Olga Vinokur). The  music covers a good span of Rodrigo's career, from 1923 to 1982.

Like "Aranquez," these pieces combine Rodrigo's strong melodic sensibilities with Spanish folk flavors and a sort of Spanish impressionist horizon, but they do so in ways more suited to the intimate chamber setting.

The works stand out in their own way as paradigmatic Rodrigo.

"Sonata pimpante" (1966) has a sparkling palette of cascading piano and exuberant violin in an unforgettable mix. "Set cancons valencianes" (1982) is steeped in Spanish folk roots with seven movements that captivate. The "Capriccio (Ofrenda a Sarasate)" (1944) has heroic unaccompanied fireworks unencumbered by the constraints of counterlines from chamber accompaniments.

The final three works continue the melodic evocations and folk strains, with guitar accompaniment on "Serenata al alba del dia" (1982); and a return to the piano as second instrument on the short but striking works "Dos esbozos" (1923) and "Rumaniana" (1943).

We are left after hearing this program with the distinct impression that Rodrigo was no one-trick pony, but rather a thorough craftsman and superb lyric Spanish voice throughout his career. These pieces are without fail miniature gems from a sure master of his own very original modern Spanish style.

Anyone who gravitates towards the "Spanish tinge" will find in this CD a delightful mix of memorable chamber sounds. Highly recommended.