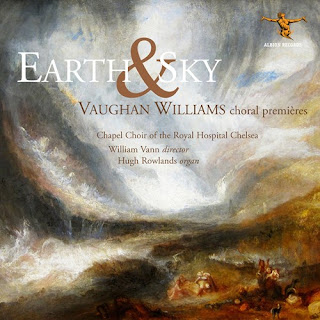 Really. when you think about it there are at least three Ralph Vaughan Williams (1872-1958) personas we might readily experience in his music as a whole.  The one most critical for we who love music must be Vaughan Williams the highly original and brilliant composer of such things as "The Lark Ascending," "A Sea Symphony," "Sinfonia Antarctica" "Hugh the Drover" and "Riders to the Sea" to name some of my favorites.

Then perhaps we might single out Vaughan Williams the local folk music enthusiast. During his life he most certainly promoted and immersed himself in the folk ethos. One can hear it at times strongly  present in his own compositions. He also did a fine job in his folk song arrangements. The folk Vaughan Williams is a key part of who he remains for us to appreciate.

Finally there is Vaughn Williams the Englishman, the civic force, the modern and traditional resident and citizen, And in this guise we feel the influence of his times and milieu in some of the music he composed for the various functions of cultural practice and commemoration.

All three of these Vaughan Williams personas come into play on the program up for discussion this morning. As part of the Ralph Vaughan Williams Society series on Albion Records, we have a beautifully performed program of 22 choral works never before heard in commercial recorded form, entitled Earth & Sky (Albion ALBCD034).

The idea that all three Ralphs have some important input in this unexpected series of musical finds seems apt and helps us understand and appreciate what we hear. These short works are not all masterpieces, of course. But neither are any of them mediocre or without some general merit. And certainly so too all provide happy listening when performed so nicely as they are here. Credit must be given to the Chapel Choir of the Royal Hospital of Chelsea under the directorship of William Vann. We also must make note of Vann's effective piano accompaniment on a number of works as well as the wholly appropriate organ accompaniment of Hugh Rowlands in those pieces that call for it. The choir sings spiritedly and angelically,  perhaps as only a first-rate English outfit sounds? And in the process they manage to conjure up a time and place when Vaughan Williams livcd, loved, thrived and made good. Made very good indeed!

Eight of these works are Vaughan Williams's well wrought arrangements of traditional songs, folk songs really. It may come as something of a shock to hear Vaughan Williams's heartfelt treatment of Stephen Foster's "Old Folks at Home." You listen, you hear the beauty of the melody again, and your extreme ambivalence about those plantations and the slavery they practiced is put in brackets for a minute. One feels no such ambiguity listening to the "Three Gaelic Songs," or "The Jolly Plowboy." Vaughan Williams took the heritage of songs and more songs as seriously as anybody did, and this at a time when the urgency of preserving a rapidly vanishing corpus of songs in everyday practice had grown acute. So all the better Vaughan William's interest in such things.

The remaining 14 pieces are original Vaughan Williams items. They have each a particular place in the music making needs of his world. Some are patriotic and geared toward encouraging and praising the war efforts he was a part of and to which he later gave moral support. We must not forget that WWI and II, and especially the Second WW threatened Great Britain's welfare directly and so the music sounds imploringly stirring as it was meant to. Other songs have a religious role to play and of course the choral group was a central aspect of religious music of the era. Other numbers have a less direct role to play one assumes as they are not as tightly tied to a function.

And in all these works we hear intimations of brilliance at times and always a well-inspired sense of melody and form.

The question in the end perhaps is who needs to hear this, have this? If you wonder about Vaughan Williams and do not yet have some of most of the works I mention at the start of this article, it may be more sensible and necessary to get a performance disks or downloads of those works before this program has any urgency of possession. Those who love choral music of the more or less Modern period yet in a mostly traditional mode will find this a very pleasing program, though in no sense will you find an abundance of innovative brilliance to these works. There are sparks. There are moving pieces to be heard. It all is worthy of hearing. All of it is nicely present and edifying.

If you are a Vaughan Williams  completest you should not hesitate on this one. For it does give a fully fleshed out portrait of Vaughan Williams the man of his times, the participant in the flow of cultural and social history of an England undergoing some curtailment of tradition and the need to assert and reassert a particular musical heritage and in so doing extend that tradition and give us an original version of it all.

So if you already love Vaughan Williams you will learn  some additional aspects of his music and his world! It is in any event a happy listen. I do recommend this one to you if you already think you are interested.