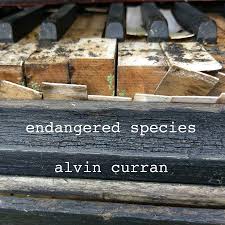 Best to start out this article with my view, that Alvin Curran has been consistently one of the most innovative and provocative composer-performers I have known in my lifetime. From his pioneering work with MEV to his compositions in the New Music mode, his sound installations and his work in Electro-Acoustics (notably the breakthrough Songs and Views from the Magnetic Garden) there have been a series of bright moments that gave us a happily unexpected and a very original forward momentum, a key part of the age we are in I think.

So a new one to me is auspicious. That we have in Endangered Species (New World 80804-2 2-CDs).  I must say that on first listen I was not quite sure what to make of the music. That of course is as it should be sometimes. Central to it all is Alvin Curran at the Yamaha Disklavier, which is a conventional grand piano equipped with a MIDI "brain" that, if I am not mistaken,  affords the operator-artist the ability to  record what is being played and also to alter the sounds electronically or put it in synch with electronically derived audio output. So it is a sort of "player piano" but in ways consistent with the advances in MIDI actualities and sound synthesis. Or that is how I understand it anyway.

With this as his canvas, paint and brushes, Curran creates the long expository Endangered Species. It is not what we might come to expect, as I have said above. It centers around a well put set of performances of "Great American Songbook" standards and some older Jazz classic pieces. So we get "Ain't Misbehaving" as well as "Bewitched, Bothered and Bewildered," "St. James Infirmary Blues" as well as "Tea for Two." He can take them out a bit and sometimes he does. He can worry around a chord or even just a note of the song at hand. Or as most of the time he gives it all a pretty straightforward reading, with a definite, distinctvely Jazz tinge but as a whole much the way a pianist might have gone about this music in a now remote, timeless past. He mentions in the liners the endless gigs where he was called upon to do such things and so clearly these are a part of his own roots.

My mother used to play these songs, somewhat in the way he does here. It was for her an un-mannered sort of thing where the song was the center of it all, and for that matter for her the songs were just a part of the music of her time, not some effort to make a Neo-Trad statement out of them. She is long gone and in some ways Alvin Curran is enacting an elegy to someone like her, the living homo pianicus as it existed in my youth and my mother's day especially. He is much more of an artist as pianist but he nonetheless evokes the centrality of song and piano as they were situated years ago.

So certainly in some ways the Endangered Species is the human world where such songs were the way much music happened, what was "in the air" at the time. The performance of the songs on the piano was a way to commune with it all. But of course there is more to it than that. I say "of course" because Curran's music is never quite single in referentiality and certainly not here.

For the piano is thrown into a world shot through-and-through with electroacoustics, sometimes straight recorded signals, other times concrete-enhanced and sometimes seemingly electronically derived sounds that conjoin closely with the piano utterances and contextualize it. Curran has always been a story-teller when it comes to electroacoustics. The  Magnetic Garden work is a classic example. We live in a world, especially from the days of radio-show sound effects onward, where there are the sounds of our world, not unmediated, but sounded in a kind of performance to create a special meaning. So the blare of traffic on a radio play was meant to convey the backdrop of the story as it was being told; it is not just there for its in-itselfness, so to speak.

With the rise of electro-acoustic possibilities especially in the school of Musique Concrete the everyday potentials of natural or human-made sounds (as mediated already in "sound effects") was reworked to be further poeticized into new contexts, altered states and transformations into directly musical intents. Alvin Curran has been an especially lucid and original story teller in this possible mode.

Now in Endangered Species he unleashes a Pandora's Box of sounds that blend in various almost orchestral ways as commentary and contrast over and against the piano standards. So we get squealing tires and car crash as conjoined with pianistic phrases, or for that manner any number of sounds, a plethora of them, the steam escaping from a tea kettle, an exotic jungle bird's cry, conversations, just about anything but made to tell some complex story. Central perhaps in lineage was Cage's Variations IV, where Cage and David Tudor created complex collages of sound via playing a number of recordings spontaneously and transcendentally while the sound of the participant-observers in the art gallery where it was performed were mixed into it all. The complex meanings were ever expanding and nearly infinite. And such doings freed up musical and extra-musical meanings in ways that liberated our hearing and made possible an understanding of Alvin Curran today.

Now Alvin has taken it all yet further by juxtaposing abstracted sounds that contextualize in fascinating ways with the piano performances. There is much meaning to be deciphered and of course no literal one perhaps, although the Endangered Species idea comes readily to mind, the solitary music maker in a sea of digital, social and ecological chaos we encounter daily? There is no one view of it all, but what keeps you coming back to the music is that it is fascinatingly ineffable and perhaps passionately human.

It is a work to experience in multiple ways and ideally multiple times. Nobody can quite create a narrative like this today save Alvin Curran. And so he remains central. Here this, I recommend! It is no doubt an essential of the now of New Music.
Posted by Grego Applegate Edwards at 10:03 AM