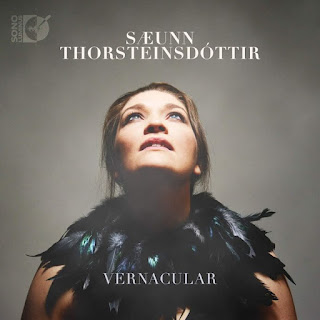 Icelandic cellist Saeunn Thorsteinsdottir takes us on a New Music journey, an adventure into the solo cello as, yes, an extended technique vehicle, as that along with more conventional articulations, all put together in a series of four compositions by composers not familiar to me, in a program that provokes deep listening and some reflective thought, all this on the album entitled Vernacular (Sono Luminus 92229).

The liners begin with Saeunn giving us a sort of encapsulization about what she is hearing in her overall lifeway. A teacher fairly early on noted how sensitive she was to "textures and harmonic overtones,"  and Saeunn goes on to muse that perhaps this has to do with the Icelandic language's wealth of unvoiced consonants. Very interesting, this! The language is old, it naturally adapts to a changing world and so she reflects New Music does the same. The composers of these solo pieces similar to Ms. Thorsteinsdottir grew up speaking Icelandic and like her have spent some considerable time abroad.

That is all so clearly put that it forms a crucial backdrop for what we hear on this intriguing album. Give Saeunn full credit for making each of these compositions quite articulate and syntactically fluid, even subject to an inner feeling of combined logic and expressivity. Every one of the works challenges the cellist to make a discourse out of what might in lesser hands sound like sound-after-sound.

We may have in the last 100 years come all manner of ways to get to this exact punctum in time where we hear the four compositions that make up Vernacular. What matters is not at this point to me the specifics of that "everywhere-at-once" journey though the thickets and open fields of Modernity. It is that this punctum is a coming together with a coherency formed of Ms. Thorsteinsdottir's engagement with her own evolving and shifting world, a place that makes room for the new yet articulates the new out of an overarching way to look at things that is at once unique and comprehensibly available to us all if we can but listen closely.

So we hear in succession "Afterquake" by Pall Ragnar Palsson, "48 Images of the Moon" by Puridur Jonsdottir, "O" by Halldor Smarason, and "Solitaire" by Haflidi Hallgrimsson. I will not attempt to separate out each in some analytical descriptors because frankly I experience this album as a whole and it connotes to me as it does as one long art-gesture. That of course does not mean that all is simply one-thinged. You hear it all and you feel each part is a significant step to the whole expression.

And so it goes in a happy way. Ms. Thorsteinsdottir impresses greatly and the composers feed her with a fully art-drenched musical expression that allows her to shine forth exceptionally well.

Very exciting and a rare thing is this. Be prepared for immersion to appreciate fully Vernacular. There is no point in engaging with this music unless you allow complete surrender to it. Then all becomes very well indeed. So go ahead!
Posted by Grego Applegate Edwards at 8:29 AM