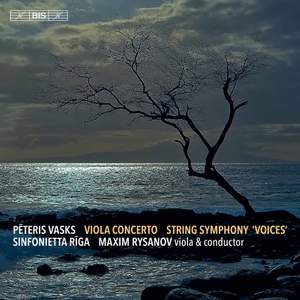 There is a quiet sort of yearning present in some of the best works of Latvian-born Peteris Vasks (b. 1946) and it is not so much Romantic in intent as it is more widely mysterious. We can hear this readily and quite happily on the recent release of the Viola Concerto & String Symphony "Voices" (BIS 2443). Maxim Rysanov most capably and beautifully plays the solo viola part and conducts Sinfonietta Riga, who in turn sound fully ravishing.

The "Concerto for Viola and String Orchestra"  (2014-15) opens with an ultra-tonal primality that has some of the folk-like string lyricism of Hovhanness and the longing long-tones of an Arvo Part.Yet one would not confuse this music with either composer because Vasks authoritatively brings his self-singing into it all. The stage is set for the viola and the entrance confirms open and stopped string eloquence and earthiness combined. The second movement catches the folk-dance mood and makes of it something beautifully wrought and infectiously engaging. The music grows more vivid and energetic in the third movement before the last movement and its exquisite peace.

The "Symphony for Strings 'Voices'" follows, written some years earlier in 1991. It opens with a strongly yearning series of chordal string blocks, goes on to depict groups of birds singing in the middle movement, with some of the most lyrically evocative music he has written. The movement culminates in a beautifully exuberant, collective mass twitter. In contrast the final movement expresses some of the political upheaval the Baltic States were undergoing while the music was coming into being. Dubbed "Voices of conscience," it expresses dismay and perhaps a yearning sense of hope. culminating in an outcry and then serene reflections perhaps, a kind of hopeful resignation? It is moving music.

So we end where we began, in a contemplative silence. Vasks' music is here especially thoughtful, seemingly perfect for the reflective solitude many of us may find ourselves experiencing of late. We get two deeply introspective works played especially well. It gives us a perfectly representative introduction to his music for those not familiar but then provides a welcome addition for those who know the composer and want more. Bravo!
Posted by Grego Applegate Edwards at 10:15 AM