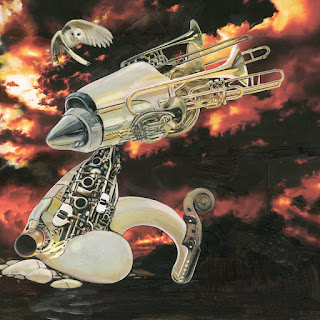 Some music has clear forbearers yet covers its own ground in happy and original ways. One such is a recent album by composer Chris Opperman entitled Chamber Music From Hell (Purple Cow PCR-009). It's about a post-human world and its music. Robotic AI dialog of a haunting nature frames the musical program and gives us an alienated universe both chilling and poetically singular.

The majority of compositions have a High Modernist tang, an orchestra texture similar in kind to Frank Zappa's later Synclavier Electronics, Then there is some stirring solo electric guitar and band on "Are We Living in a Computer Simulation?" featuring Mike Keneally on guitar, Opperman on Synclavier and a game rhythm team of Kurt Morgan on bass, Ryan Brown on drums. It reminds of classic later Zappa jams but then has its own distinct way.

Throughout the purely electronic blends with  a Rock presence and in the end one is very impressed with the outcome. The AI personas, some anyway, seem taken aback by the automatons in charge who have snuffed out their masters in an act of humane-ness. The music explores the drama of empty loss, I guess you could say, the chilling emptiness of the never-more.

A highlight is surely the finale, a 15-part "Cribbage Variations" (2017), a long intricate chamber work based on a tone row from Webern. The chamber ensemble amalgamates organic instruments with their synthesized equivalents, with some actual trombone and piano in parts that extend in good ways the aural palette.

The for-once-and-for-all virtual landscape that replaces humanity altogether seems much less fantastic, much less unbelievable than it might have in 1950. That atmospheric once you experience the unprecedented lockdown of the Pandemic seems analogous to what one may well be missing in the bricks-and-mortar decline, the increasing loss of society-as-experienced. Opperman creates a Futurism of AI characters and synthetic flowering that makes sense, amplifies the story line and gives us a High Modern chamber newness that owes such to the modernist past yet updates the possibilities for expression in this plunge into a virtuality existence we all know increasingly well, even though of course we are still INSIDE it all ourselves..

The music is original and ultra-expressive, varied and moving, filled with the futurist now, New Music of true distinction. If it follows in Zappa's footsteps it does so with originality. Very recommended.