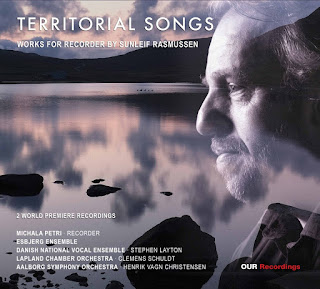 Sunleif Rasmussen gives us his own nicely idiomatic recorder music possibilities on his collection of some World Premiere Recordings (2) and other recent works called in total Territorial Songs: Works for Recorder (OUR Recordings 6.220674). Michala Petri does a remarkable job bringing the recorder parts to life throughout for all five varied and contrasting works. The album has been released to coincide with Rasmussen's 60th birthday and it gives us happy reasons to celebrate along.

Each work has a differing configuration of players and each stands out in effective and moving contrast. And as one listens and takes stock one feels the unique presence of each work gradually, and without exception with an eventual joy of recognition. So the title work "Territorial Songs" (2009) is a concerto for recorder and orchestra and via its five movements lays down a rather remarkable impression with its Modern yet songful score and its fine performance by Petri and the Aalborg Symphony Orchestra.

Another high point is "FLOW" for recorder and string trio (2012) which has a definite expanded Modern tang and a sense of humor though it is quite serious throughout in its musical brilliance, its Neo-Classical wire-y quality, its punch.

"I" for recorder and chamber choir (2011) gives to us yet another unexpected ambiance.

And for different reasons we get hooked into things again on the atmospheric "Winter Echoes" for recorder and 13 strings (2014), and too the recorder solo gem "Sorrow and Joy Fantasy" (2011).

The sum of it all stands out once we give the music the proper attention. It affirms Sunleif Rasmussen as a composer of stature, Michala Petri and all the accompanying performers as suited remarkably well to give us a benchmark version of each work.  Strongly recommended.