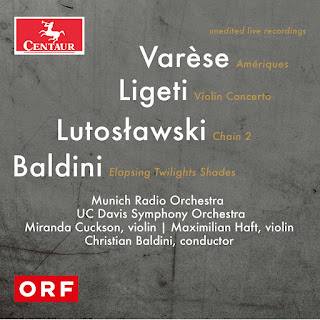 If the Space Age has resumed (with Space-X, etc.) then High Modernism cannot be too far behind? Not that it ever has gone away but it has not been as much of a touchpoint as it once was. No matter, for there is good music being made still. An excellent example just now filling my ears is a new anthology of Orchestral Music Live, Varese, Ligeti, Lutoslawski, & Baldini (Centaur CRC 3879), featuring Christian Baldini conducting the Munich Radio Orchestra and the UC Davis Symphony Orchestra with violin soloists Miranda Cuckson or Maximilian Holt alternating in the solo spot for half the program.

Baldini turned to these unedited live recordings from 2012, 2015, 2018 and 2019 as he and all of us experienced the first COVID-19 lockdown and the abrupt cessation of all live performances the world over. As if to offer a rejoiner to the viral devastation we all experienced on multiple levels, this group of works and very live recordings in some ways acts as a ritual charm, a kind of mantra magic for the future continuation of the concert universe. The works and composers reflect Baldini's personally influenced attitude toward the program as performer and composer, and then nicely and fittingly opens with a work of hs own that fits quite readily with the rest, that is in every way good company for the more well-known Classical Modernists.

That opener, Baldini's "Elapsing Twilight Shades" (2008, rev 2012), establishes the kind of  ultramodern sonic landscapes that are a legacy and a basis for Baldini's considerably eloquent orchestral approach.

And appropriately the stylistic clustering he has been influenced by appear nicely too in the versions of the works he conducts on this program.

It is all strikingly landscape-soundscape-like, where phrases flow concurrently and do not puncuate as heavily as they might hve in other and earlier performnces. So "Ameriques," a wonderful work surely, has sometging of an emphasis on its horizontal axis, predominent and interestingly so. It is by no means a perfect recording. Others are probably more driving and together but then this version forces you to feel the music passing perhaps a bit more, and some sections you hear differently and get something more from perhaps than the versions you have come to know, which of course is a reason to have more than one version of a work.. It is nice to hear, as is the whole of this album.

The Lutowslawski "Chain 2" (1985) for violin and orchestra is remarkable in itself and for Maximilian Haft's violin performance as well as the orchestra at large. It is a genuine find if you have not heard it before.

Similarly the Ligeti "Concerto for Violin and Orchestra" (1989, rev. 1993) revels in Miranda Cuckson's reading and the orchestral presence. It is a wonderful work in a significant reading.

The unedited live recording reminds us that things do not have to be perfect to be rewarding and illuminating. The live spontaneity means there are some imperfections here and there, but after a time you fogive the very occasional flub for the way everything hangs together in the absolute now.

I recommend this one heartily for New Music devotees and newcomers alike. The music demands much from the performers and they surmount the live situation with fire and poise combined. Molto Bravo!

Posted by Grego Applegate Edwards at 10:23 AM