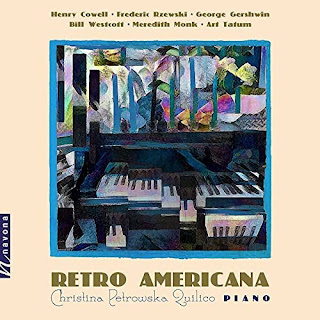 Christina Petrouska Quilico is a pianist I admire and appreciate. She did an album of French visionaries that I like a good deal and reviewed last August. Type her name in the search box above for my reviews of the very nicely done performances of the late Ann Southam's compelling music as well as some other fine Quilico things I have been happy to hear and write about.
And now today another of note, a collection aptly titled Retro Americana (Navona NV6361). What is the first thing that strikes me? The broad breadth of composers and works covered. Some George Gershwin, that is expected, but then Henry Cowell, Frederic Rzewski, Bill Westcoff, Meredith Monk and a couple of transcriptions of a few choice Art Tatum improvisations.
What it gives you as you listen is the idea that, as you might expect, Gershwin and Tatum cover the artistic transformation of the earlier vernacular--Jazz and Popular music of the earlier time. Tatum of course excelled at taking standards and making them his own pianistically. On the other hand Gershwin does something different but equally pianistic to his own staple song classics, but either way they address a content that typifies the more cosmopolitan aspects of Americana proper. Westcott does something transformative to earthy jazz-rag piano roots, nicely so. The "Suite" has some beautifully wrought, harmonically rich jazz inflected music that makes me want to hear more.
Meredith Monk's four pieces are folkishly somewhat ritualistic and perhaps a commentary on the Jazzier sides of Americana roots. It involves a pronounced movement, a dynamic of forward motion that suggests the hard swinging of early Jazz without stating it directly.
The "Six Ings" of Henry Cowell makes his pioneering early Modernism palpable and retro in its very own futuristic way.. Ms. Quilico shows us how splayed in wonderful spaciousness an excellent reading of such Cowell classics can be. The music reminds us how the Early Modern period in North America was a special, bold time for expressive pianism--we have the Cowell works which we get a worthy sampling of here. Of course there is much else we might hear as well,  the Ives beauties among others. Cowell's "Six Ings" nevertheless sound wonderful in these brilliant readings. No doubt we would get something very interesting if Ms.Quilico did an Ives album! I certainly would want to hear that. But this anthology has plenty going for it so we listen with pleasure, or I do anyway.
After the sad loss of Frederic Rzewski it is fitting we hear his "Winnsboro Cotton Mill Blues," which has the insistent rhythmically of machine production and simultaneously reminds us of the lively juke blues rhythmicality of the early 20th century and beyond, from Boogie to Jump. Christina sounds perfect in her deft realization of ostinato and overlying melodic expressivity.
The performances throughout are uniformly moving, well informed and practiced in making come alive the style requisites that are critical to get this music truly to sing. It is a rather perfect joining of artist and compositional style. I suspect you will find this one a real winner, even if you do not know all or even perhaps any of the music. Kudos, bravos! Listen to this one by all means!
Posted by Grego Applegate Edwards at 11:01 AM