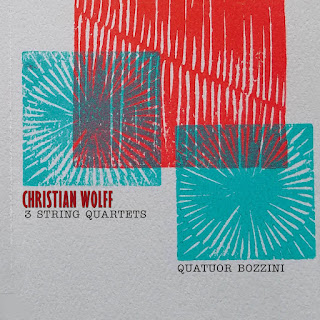 At this later date in the scheme of things the main composers in the John Cage School might be taken for granted, though it is a mistake to do so. As time goes on it is clear that Morton Feldman, Earl Brown and  Christian Wolff over time forged their own identity and should at this point be listened to for themselves. That applies to Christian Wolff as much as any of them. Perhaps even more, since he has not always gotten his due, even as we consider all three. He still lives and has continued to develop into his very own stylist. I have reviewed some of his things on here that hold their own (type his name in the search box for relevant articles). And now we have another album that adds considerably to our knowledge of his music both recent and somewhat less recent.

So today we have a program of Three String Quartets (New World Records 80830-2), three World Premier recordings of as many quartets, played ably and impressively by Quatuor Bozzini. As Michael Pisaro-Liu tells us in the liner notes to this album, Wolff beginning in the '60s began to refigure, to re-emphasize key musical elements in a kind of re-thinking of chamber music. Specifically Pisaro-Liu notes how he "created music in which the activity of the performers--timing, cuing, assembling and selecting materials--were foregrounded" in more pronounced ways than might be typical in classical chamber works up until then.

All those considerations are in the end rather complex to try and address in a short little article such as this one. Suffice oi say that the music as presented here show formative and at times deep roots with that set of idea-processes.

The three quartets focused upon here show themselves as products of the three slices of time they represent and were composed within. So each of the works, the opening "String Quartet Exercises Out of Songs" (1974-76), "For Two Violinists, violists and  cellist" (2008), and "Out of Kilter (String Quartet 5)" (2019), all have their own individual identities and flairs, such as the folksy Americana and special juxtapositions in "Out of Songs" and the winning forays into Modernist abstraction contrasting with patches of straightforward, plain-spoken tonality.

And in the end it is as much a matter of when as it is of what--hence the centrality of performers as mentioned above. Each of these quartets sound like nothing else and they do not so much sound like the other two either. It is a rare and singular originality to be heard here and the Quatuor Bozzini plays them like they belong to them--which in fact they do. A strong recommendation I give this program. It is what "Modern" can sound like today! And very compellingly so.

Posted by Grego Applegate Edwards at 10:40 AM