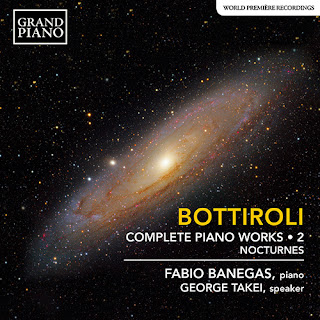 Who? Jose Antonio Bottiroli (1920-1990) an Argentinian native, composer of piano music with an exploratory gentleness that we hear most vividly in the recent CD Complete Piano Works 2: Nocturnes (Grand Piano GP871) world premiere recordings nicely played by Fabio Banegas, the composer's protégé. They reflect in part Bottiroli's sun soaked holiday home in Los Cocos, Cordoba Province, Argentina. It is lyrical, Impressionistic in its own way, an Argentinian Satie, Grieg or Chopin with his own special originality and incisive expression.

In all the program contains 16 Nocturne miniatures stemming from 1974-1984, and then "Cinco Replicas Para Piano "1974-80, which consists of six probing poems by the composer as recited by Star Trek's George Takei, followed in each case by a piano movement in response.

It is all good, Refreshingly unpretentious, disarming, it comes off as sincere and carefully inventive. The more you listen, the more you find it all rather enchanting, or I do anyway. I recommend it to all 20th Century Moderns who love a well turned solo piano piece, and of course those who want to get a handle on what was going on in South America last century. Either way you will find music to savor and appreciate.

Posted by Grego Applegate Edwards at 8:49 AM