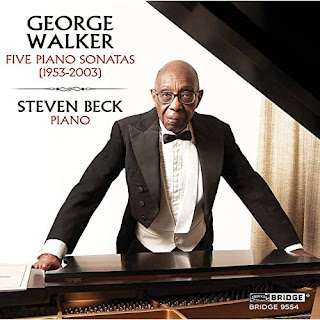 I've been listening to New Music for a very long time now and if you mention the name George Walker I remember a few LPs that featured one or more of his compositions. He has or had (1922-2018) his own very expressive way, Modern but his own dynamic choice of notes and space. If you did not know he was African-American would you have guessed from his works?  I do not know about your ears but surely he stands out in general and as somebody worthwhile with or without categories.

There is a new album out and it re-affirms his special musical way. It is his Five Piano Sonatas (1953-2003) (Bridge 9554) with Steven Beck doing a fine job playing all five relatively short works.

Each one is a sort of pithy gem. Each has a nicely chromatic density, and a spatial-aural, articulate and dense tumbling quality that sounds ever fresh and inventive. They spin out of the program in chronological order and at the same time they unfold as a definite relation of continual self-development, all with a special virtuoso quality that comes out of the music rather than causes the outcome, so to speak.

So there we go. This is beautifully involved, strikingly expressive piano music that you who have good ears will understand and love, I hope.

Posted by Grego Applegate Edwards at 10:52 AM