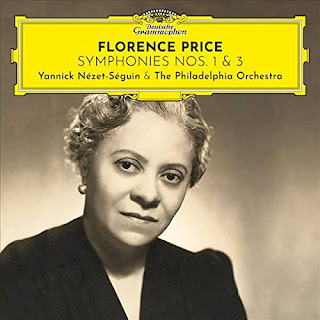 One of the more rewarding composer revivals recently has been that of Florence Price (1887-1953). whose music underwent a long period of neglect after the Chicago Symphony premiered her First Symphony in 1933.  As an African-American woman she had obstacles to surmount, but thankfully her music is enjoying a re-emergence. I happily reviewed  John Jeter and the Fort Smith Symphony's CD of her first and fourth symphonies (see review of March 12, 2019) . I have a set coming up for review of some of her chamber music, and now I am glad to be hearing and talking about Yannick Nezet-Seguin performances of her Symphonies Nos. 1 & 3 with the Philadelphia Orchestra (Deutsche Grammophon 80034879-02).

The first thing that stood out as I first listened was the quality of the performances and the recorded sound. Both are first-rate. And thanks to the careful yet feelingful readings we get the full-fledged orchestrational  impact--densely scored yet varying in the leading melodic voices changing from instrument group to instrument group over time.

Both symphonies weigh in with alternating pastoral and turbulent Neo-Romantic expression, with a fair amount of Afro-Americana with Spiritual, Ragtime, Jazzy elements exuberantly transformed into a well thought-out symphonic matrix.

I am glad we can at last hear Florence Price in some depth. I look forward to more. Grab this one in the meantime. It is fully worth it! Bravo!

Posted by Grego Applegate Edwards at 10:10 AM