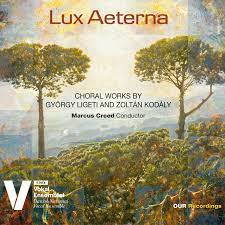 As I sit here and listen happily to Lux Aeterna (Our Recordings 8.220676) I wonder why it should strike me as out of the ordinary, not entirely expected. I wonder why my initial reaction to the pairing of choral works by Gyorgy Ligeti and Zoltan Kodaly seemed unusual to me. They both are Moderns, of course, both have Hungarian roots, and both have Slavic aspects to their music. Still, they contrast in that Ligeti is of course more advanced in the avant sense than Kodaly. And perhaps it may sound odd for me to say this, but as time goes by the degree of avantness seems not to matter as much as it once did to me. The music convinces or it doesn't, regardless of the degree of advancement. It is I think a part of being in the world we are in, where there is a multiplicity of styles and tendencies.
All that only makes sense of course if the program and its performance hang together. That is most certainly so with this album. The Danish National Vocal Ensemble under conductor Marcus Creed puts a greatly expressive focus on each piece of music, conceiving the essence of the program in moving and absorbing ways.
So we appreciate how all concerned make High Modern sense and yet also have a sort of folk quality --whether it be a matter in the case of Ligeti of his "Lux Aeterna" (1966), the earlier works "Zwei a cappella-Choir" (1955) "Matraszentimrei Dalok" (1955) or the "Drei Phantasien nach Friedrich Holderlin" (1982). The 1955 works understandably have a slightly more down-to-earth almost nationalist dynamic than the title work, and the "Phantasien" nicely falls somewhere in between stylistically.
They are all excellent examples of how Ligeti does not easily fall into a neat cubbyhole in terms of style and trajectory. Every work in many ways forms an indivisible exemplar, a set of one. And as one gets to know each work here one feels in the presence of a master in exceptional control of his resources and creative expressibity.
And it so happens that the earlier works set up nicely a contrast with the Kodaly works, how a kind of folk veneer bounces off a contemporary stance in either case, with Kodaly perhaps a more elemental Modernism and melodic Folk hybrid with his "Evening Song"  (1938), "Evening" (1904) and the  "Matra Pictures" (1931).All three remind us what a powerfully inventive lyrical voice Kodaly could be.
And as it so happens the four compositional groupings by Ligeti and the three shorter ones by Kodaly are fine offerings and work well together in their essential rootedness. It is a pleasure to experience this one. Recommended highly.
Posted by Grego Applegate Edwards at 10:11 AM