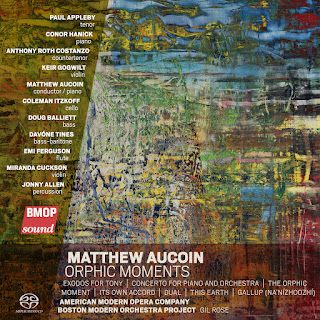 Composers new to us open up unexpected musical autobiographical worlds, when things are right, that we never would hear otherwise. And in the end our musical worlds on the New Music front are built person-by-person, artist-by-artist, composer-by-composer. And happily Matthew Aucoin (b.1990) is one of those potential building blocks of stature today. I have been listening to his two-CD release Orphic Moments (BMOP Sound 1084) and it is filled with interesting orchestral and vocal-orchestral music spearheaded by Gil Rose and the Boston Modern Orchestra Project, along with the American Modern Opera Company.

This release marks the first of a series of collaborations of the Boston Modern Orchestra Project with the aforementioned American Modern Opera Company, the latter co-founded by Aucoin.

The seven works featured in this set were written over a period of seven years, showing a coming of age and artistic development in both orchestral music per se and also with operatic vocal-orchestral works. It is a music of inspired complexity, expressive Modern dynamic and harmo-melodic depth.

Many of the works were written for specific musicians in mind and benefit nicely by having those artists on the performances as applicable. The music can groove and pulsate somewhat and it can also extend outward in intricate multi-stranded musical passages. Like a number of present-day composers the music assumes that both Serialism and Minimalism have passed through our musical consciousness but that it is a time for a beyondness that avoids the doctrinaire specifics of those styles and instead strikes out on its own with a personal expression that is of our time without necessarily making a point of its Modernity per se.

But then again there is no mistaking the fresh Contemporary quality of the music. Listen to the 2016 "Concerto for Piano and Orchestra" and the 2014 title work "The Orphic Moment" with countertenor Anthony Roth Costanzo and you will get a strong impression and a lucidly inventive certainty that is a joy to hear. The remaining five works each have a special resilience and presence that makes it a first rate listen and gives you a bird's eye view (bird's ear?) of the Aucoin musical personality. Very impressive music. Bravo!