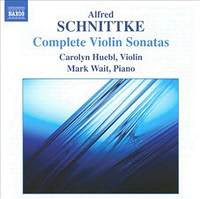 Of all the recognized Russian composers of the 20th century, Alfred Schnittke (d. 1998) often sounds the least Russian. He ordinarily avoids nationalist melodic, harmonic or rhythmic tendencies, preferring instead to carve out his own version of the expressive modernist international style in its later developments. This is especially true of his chamber music. Schnittke's four sonatas for violin and piano were composed over most of his active career, the first stemming from 1955, the last, 1994. It turns out they all fit nicely on a single 70-minute CD. Violinist Carolyn Huebl and pianist Mark Wait set out to do just that, and they have succeeded in giving us thoroughgoing, expressive and exacting performances of same on a new Naxos release (9.570978).

Other than the first (unnumbered) sonata from 1955, these are certainly on the surface of things firmly in a modernist tradition. They nevertheless bear the individual Schnittke watermark: often utilizing twelve-tone-serial-and-beyond techniques but in a very personal way, freely bending them toward his own harmonic and rhythmically lively ends while culling and synthesizing the full spectrum of concert music styles from the Baroque to the present, all in ways that are distinctly Schnittkian in their strikingly inventive thematic idiosyncrasies.

The violin sonatas are excellently representative Schnittke. The 1955 work a fascinating look at his early beginnings, the first through third sonatas masterpieces of 20th century chamber arts. Ms. Huebl and Mr. Wait do an excellent job bringing out the nuances of these very complex and vital works. The sound is very good as well. It's a treasure trove for an Schnittke enthusiast; it also serves as a good introduction to his music for anyone unfamiliar with it. At the Naxos price the disk is especially attractive!
Posted by Grego Applegate Edwards at 6:29 AM