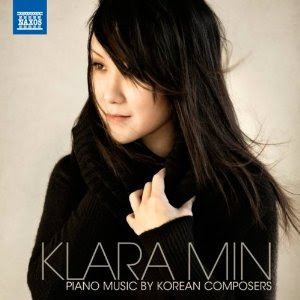 One definite plus about a label like Naxos is that the price is reasonable enough that one can afford to explore the more adventuresome, less traveled byways of the classical repertoire. As your designated tour guide, I can help you negotiate via these reviews the more tangled thickets and avoid the crocodile-infested bogs along the way. At least I hope so!

Pianist Klara Min's new release is a good case in point (not of the crocodile bogs; the interesting by-ways!) Pa-Mun, Ripples On Water (Naxos 8.572406) exposes us to five Korean composers and eight solo piano works spanning the time period of 1958-2004. Isang Yun (1917-1995) will likely be remembered by those who followed the modern classical music of the '50s and '60s as it appeared on record. Other names may be less familiar: Younghi Pagh-Paan, Sukhi Kang, Uzong Chae, and Chung Gil Kim.

The pieces to a western ear do not sound especially Korean on the surface of things--that is, they do not especially resemble the traditional Korean classical and folk music one has heard. What all works have in common to some extent is a heightened feeling for sound and silence, quietude and movement, which of course need not be particularly Korean. Debussy, Ravel, Scriabin, Messaien all in their own way made good use of such contrasts.

But the composers here do not sound like them either. There are contemplative turns, there are quasi-neo-minimalist uses of repetition, and most of all there is a poetic approach to the piano, as if each phrase is the strain of some unknown and indirectly expressed poem.

Thanks to Klara Min for bringing out these qualities of the music on this disk. She is quite suited to the music she performs, as the music seems suited to her. These are not big, brash, bravura sorts of performances pieces. They are intimate. Klara Min conveys that sense with beautiful phrasing, a deceptively facile way of handling the difficult pages and a dynamic sense so important to the successful performance of this music.

Very interesting piano music. Very well played. Very recommended for those who have grown tired of the staples of the repertoire, or for that matter those who have not.
Posted by Grego Applegate Edwards at 5:36 AM