Two Later Symphonies of Havergal Brian in a Recent Release: Listening to Symphonies No. 20 and 25 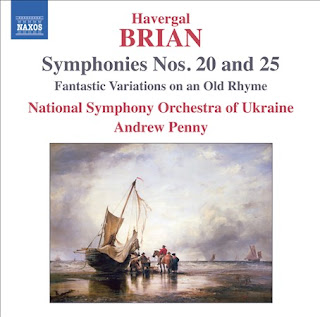 English composer Havergal Brian lived a long life (1876-1972) and went his own way despite the winds of stylistic change that blew through his culture while he lived. A late romantic and gigantist he often summoned large orchestral forces to create sprawling symphonies of great length and complexity. He persisted despite his anachronistic status, leaving behind a large body of works, recordings of which in my experience were pretty rare until the advent of the digital era.

Naxos has been covering a cross-section of that output, the latest of which is a recording originally released on Marco Polo, Andrew Penny conducting the National Symphony Orchestra of Ukraine in respendently respectable readings of Symphony No 20 (1962), No 25 (1966), and "Fantastic Variations on an Old Rhyme" (1907). The two later symphonies are broken into three movements apiece, a change from his earlier practice of conceiving his works in single long movements.

I have tried on a few occasions to digest a Brian symphony and found myself slightly adrift each time. The earlier works do go on. Sometimes listening is like witnessing a three-way battle between Richard Strauss, Elgar, and Mahler, with no winner on the field at the end of the melee save perhaps Brian himself. Thematically one sometimes feels as if one is playing a Where's Waldo as one threads one's way aurally through the rich and complex syntax of his symphonic vocabulary.

Listening to the new release at hand (Naxos 8.572641) I've come to realise that his music is almost all Waldos, so to say. The foreground/background, theme versus development and passagework, the sort of thing you expect to find in a typical romantic symphony, does not necessarily apply. Brian writes in long complex phrases, like a country lane that, yes, is meant to get somewhere but takes many twists and turns in doing so.

The earlier "Fantastic Variations on an Old Rhyme" takes the "Three Blind Mice" children's song and subjects it to extensions, convolutions and reworkings so that at many points it becomes unrecognizable, only to make a fragmentary return before Brian goes off again on a long digression-as-progression.

The Symphonies 20 and 25 are equally illuminating, for the listener who focuses on following the orchestrational and harmonic-melodic kaleidocopic linearity. The modern sonic staging of the rather large instrumental arsenal in these pieces allows you to revel in the sensuality of Brian's treatment of the orchestra. The clarity of Maestro Penny's interpretations helps you engage in the many episodic Waldo appearances and/or disappearances.

You come to realize that Brian only SOUNDS like a typical late romanticist. He is quite eccentric and even ornery in his refusal to present a symmetrical unfolding of themes and development.

That's what struck me listening to this fine addition to the Brian discography. It's a sonic epoch and gives you in short, relatively compact segments what Brian's music can be about.

And for all that I would recommend this one if you want to try a way into his music. This is no ordeal; it is music that has orchestral brilliance that makes for pleasurable listening. The vastly populated "Waldo-landscape" will challenge you and give you another sort of pleasure as well if you are willing to work at it.


Posted by Grego Applegate Edwards at 5:19 AM