Villa-Lobos' "Forest of the Amazon": Complete Version by the Moscow Radio Symphony 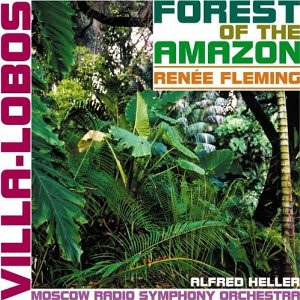 Nearing the end of his life Brazilian composer Heitor Villa-Lobos wrote the symphonic soundtrack for a movie version of Green Mansions. When that movie failed, so the story goes, Villa-Lobos expanded the music into a full symphonic work, Forest of the Amazon. It is in its own way one of the composer's masterworks, though for a time it was not often performed, if at all. The definitive recording is still probably the one conducted by the composer and released on LP around 1959.

However the first recording left off a good deal of the music due to the time limitations of the 12-inch LP format. The full score was never collated by the composer, as the parts originally recorded became the main concern. Conductor Alfred Heller, a Villa-Lobos protege during Heitor's final years, has reconstructed a critical edition of the score and produced an important new recording of the work, containing 50 minutes more music than the LP was able to present. Renee Fleming rivals original soprano Bidu Sayao in recreating the solo vocal part and the Moscow Radio Symphony does a good job with the now 74-minute version. The recording was around for a number of years but went out of print. It is now available as a Delos CD.

I've long listened to the original LP and it is still an exhilarating experience for this writer. However the full-length version is a revelation. Themes return, are more fully developed, and the enchanted mood of the score is that much more intensified. My only quibble is that the Moscow Radio Symphony does not always capture the fully Brazilian quality of some of the passages, especially those which bring in the chorus.

Nonetheless Alfred Heller has given us a dynamic and exciting version of the full score that rewards the listener with all the color of Villa-Lobos at his orchestral-orchestrational best.

Ideally one should have the original recording along with this one. If you can't manage to find both, then this one makes a fine substitute and gives you everything originally intended to be a part of the work. It should be heard by anyone with an interest in the composer and/or the modern orchestral palette.
Posted by Grego Applegate Edwards at 5:32 AM