Busoni, Doktor Faust: Sir Adrian Boult and a Stellar Cast Do A Bang-Up Job in This Historic Recording 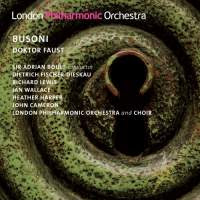 Ferruccio Busoni (1866-1924) was a key transitional composer who bridged the gulf that opened between the romantic and modern-expressionist schools. His piano pieces are revered by connoisseurs. Then there is a major opera, Doktor Faust, left nearly finished at his death in 1924.

Noted conductor Sir Adrian Boult put together an abridged concert version of the work for BBC and recorded it in 1959 with the London Philharmonic Orchestra/Choir and an impressive cast of Dietrich Fischer-Dieskau, Richard Lewis, Ian Wallace, Heather Harper and John Cameron. The recording, fitting one disk at 74 minutes length, has been issued recently (LPO 0056).

It's a work of definite merit, with plenty of dramatic scoring and vocal presence. Boult and cast do a great job building the case for the opera as a fully worthy modern masterwork. The performance here is surely one of the very best on disk. One quibble: there is no libretto included. Of course nowadays one can readily find such things on the internet. Nonetheless it is a shame that it was omitted. Aside from this, though, Boult's version is a real winner!
Posted by Grego Applegate Edwards at 5:02 AM