The Pacifica Quartet: String Quartets by Dimitri Shostakovitch and His Contemporaries (The Soviet Experience, Volume 1) 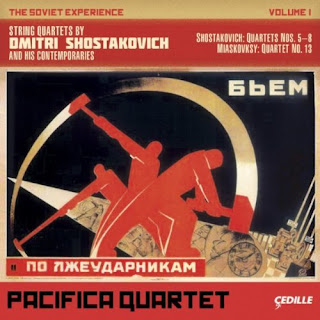 Bela Bartok and Dmitri Shostakovitch created a series of string quartets that hold their own today as singular masterpieces of that genre in the 20th Century. There are others too, of course. But nowhere else is the sublimity of the late Beethoven quartets so rivaled.

There is a new recording of the middle-period Shostakovitch quartets (nos. 6-8 of the 15 total) The Soviet Experience, Volume One (Cedille, 2-CDs 90000 127). The Pacifica Quartet play these and, for good measure, Miaskovsky's Quartet No. 13. The title of this set is understandable, yet perhaps a bit ironic. Stalin and his Social Realist minions hounded Shostakovitch through the bulk of his career for his modernism, which they deemed bourgeois and "formalist". Time and again in his more publicly visible symphonic and operatic premiers he was taken to task. Seemingly with the Quartets he defiantly proceeded to develop the music as he saw fit. And perhaps because the quartet premiers were less a public occasion the apparachniks had less to say about who could play them and when. In any case this music exists almost in spite of the "Soviet Experience," so the title is not a straightforward one.

What counts however is the music and its performance. The Pacifica Quartet do a marvelous job to bring out the excitement of the brio passages and the contemplative, tender sadness of the slower movements. This is a very fine performance of these quartets, one of the best I've heard, if not THE best. The Miaskovsky No. 13 is well played too. It may not be quite at the level of the Shostavovitch works but it sets them off well and provides an interesting contrast.

I hope the Pacifica Quartet go on to record the rest of the Shostakovitch cycle. For now we can be thankful that this recording of the middle works is with us. It is a must-hear!
Posted by Grego Applegate Edwards at 5:08 AM