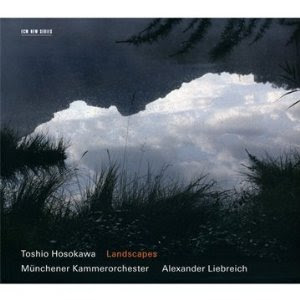 Hosokawa's music combines the long sounds of Japanese ancient ceremonial Gagaku music and other traditional forms with the modern sound-coloristic, soundscape approaches that are an important aspect of contemporary concert music. It all works convincingly and movingly on Landscapes. Based on this program Hosokowa stands alongside Takemitsu, Mayuzumi and Ishii as an important modern Japanese composer who works with tradition in innovative ways.

It is music to contemplate, linger over, revel in. It is a very excellent example of the vital compatibility of tradition and modernism in the contemporary music world. Hosokawa shows us as he puts forward this series of tone-essays that, under the masterfully sensitive baton of Alexander Liebreich, his music is one of the most convincing new developments in modern concert music in this decade. By all means give it a listen!
Posted by Grego Applegate Edwards at 4:50 AM