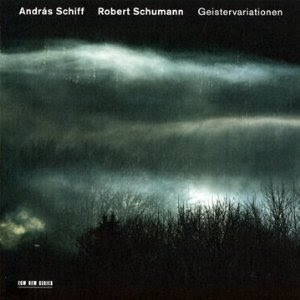 Robert Schumann is not a modern composer, obviously. But I include this recording on the blog today because it involves high-romantic pianism played with the sort of renewed attention to the notes and phrasing that sounds modern. Pianist Andras Schiff plays some of Schumann's most ambitious and moving solo piano works on Geistervariationen (ECM New Series 2-CDs B0016115-02) in such a way that you hear clearly the phrasing and fully realized note values that Schumann intended. Truth be told, I have heard many performances of these works where the sustain pedal and an overarching dash of passion make up for lack of precision. Andras Schiff brings the MUSIC to our ears minus the overwrought expression, though his playing does not lack warmth and drive, and with the keen architectural attention to detail that allows us to hear the melodic-harmonic brilliance of the music.

It's a double CD with plenty of room for many of Schumann's best works, "Papillons," the C Major Fantasy, the Opus 11 Piano Sonata, Kinderszenen, Waldszenen and his final work, the Geistervariationem.

Andras Schiff is a remarkable pianist. Listening to this set, it is as if you are hearing these pieces for the first time. Highly recommended--even for those who are not confirmed Schumann-lovers.
Posted by Grego Applegate Edwards at 5:13 AM