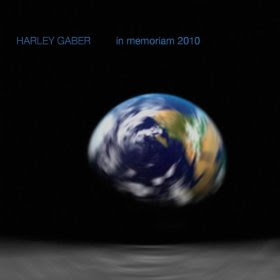 The mature Harley Gaber as composer favors long continuous sound matrixes of electro-acoustic poeticism. His The Winds Rise in the North from the seventies was an extraordinarily dissonant and intense piece that involved continuously modifying tone blocks of strings. I saw My Mother Ascending Mount Fuji (Innova) was a long-term project that used more consonant soundblocks and electro-acoustics combined with conventional instruments to create a mystical sort of rarified equivalent of high altitude in sound (see my review in the July 13th, 2010 posting of Gapplegate Music Review-- http://gapplegatemusicreview.blogspot.com).

The new release In Memorium 2010 (Innova 243) was commissioned by Dan Epstein in memory of Nancy Epstein. It is an elegaic six-movement electro-acoustic tone poem of eerie beauty. There are the continuous sound blocks again, but the sonics are more drenched (to my ears) in the sounds one might hear in an underwater world (to Mt. Fuiji's air). It is a strangely intriguing, ever shifting world he creates, the musical equivalent of a set of memories recalled as if in a dream.

It is in its own way an electro-acoustic near-masterpiece of our times. Happy Thanksgiving.
Posted by Grego Applegate Edwards at 4:26 AM