John Carollo, Transcendence in the Age of War 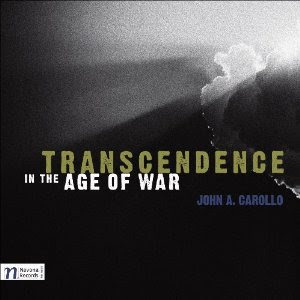 John A. Carollo is an American composer that minds (and mines) modernist roots to forge an expressive personal style. I reviewed his Starry Nights on this blog last July 16, 2011. Now for a look at an earlier release, Transcendence in the Age of War (Navona 5817).

This one covers a wide spectrum of chamber and orchestral forms.

Carollo has a real knack for constructing melody/ensemble lines that have a modern ring to them and tend to soar expressively. This is quite true of the two short pieces for string orchestra, Desiderio and Let Thy Mind Be Still, which like Starry Night from the second album have a kind of Ivesian rootedness combined with a Carollian uniqueness. There is a denser, more active texture to String Quintet No. 1 for 10-String Guitar and String Quartet, but the inventive line knack is again at the forefront.

Fear of Angst for Flute, Cello and Piano has more chromatic expansiveness and a more expanded harmonic range for the first movement. It is also very well conceived. Movement two is quite beautiful, with striking pitch-timbre contrasts between flute and cello, the piano mediating somewhere at the center of the sound. The final movement has a more desolate quality, then some turbulent final bars.

The title piece, Transcendence in the Age of War for two pianos has a dense, restless, endlessly modulating quality appropriate to the subject matter.

So there we are. A very well played set of interesting compositions, some rather sublime, some rather edgy, all showing the inventive talents of John Carollo. If you can only get one of his two CDs, Starry Night would get my vote for its beautiful string pieces. Transcendence in the Age of War comes in a close second. Here is a composer of today that deserves your attention.
Posted by Grego Applegate Edwards at 5:16 AM