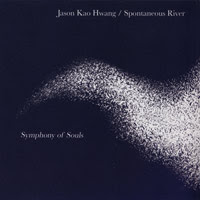 Jason Kao Hwang is not afraid to do something new. Improvising violinist, composer, conductor, he's formed Spontaneous River, an orchestra of improvising artists. There are currently 38 string players. Jason on solo violin plus 14 violinists, including Sarah Bernstein; five violists; five cellists, including Daniel Levin and Tomas Ulrich; six contrabassists, including Michael Bisio and Ken Filiano; seven guitarists, including Dom Minasi and James Keepnews; plus Andrew Drury at the drums, making a total of 39 instrumentalists. The point is that these are some of the most actively interesting and accomplished string improvisers on the New York scene.

They join together to play Maestro Hwang's 11 movement composition Symphony of Souls (Mulatta 022). I am deliberately posting this review on my modern classical site because I think it's important that this work be heard by new jazz improv conoisseurs but also those who follow and appreciate contemporary classical works from the present day. I believe that both groups with their overlaps can well appreciate what is going on in this music, given repeated listens and concentrated attention.

What then of the music? It has composed modern orchestral sections; it has some flat-out ultra-modern jazz orchestralities, it has opportunities for the collective aggregate of musicians to improvise together freely in various combinations, and it has passages where the written and the improvised work together in contrasting and synthesizing ways.

The sum total musical impression the work makes in this recording is of a free adventure, a virtually limitless but conceptually consistent exploration of the various possibilities such an ensemble presents. There are open improvisational sections where the entrances and exits and the nature of those musically are guided by Hwang's conductions. The personal stamp of the improvisers' styles are an important part of the sound. Since I am quite familiar with some of these players I can recognize their improvisatory input. But even those I am not that familiar with help tailor the total sound for a rather unprecedented result. This piece performed by another group of improvisors would have the same sign posts but the results in the way the signposts are made to sound and the manner of the collective improvised sections would undoubedly sound different. From performance to performance even with the same group there would be variations in the total effect. And that's good!

In short this is complex, engaging music that covers much ground. It fills the interstices between new improvisatory music, modern jazz and avant orchestral-compositional practices. And it does so in ways that enthrall, excite, agitate and make tranquil, intrigue and overwhelm, and open up passages to new soundworlds.

It is the sort of music that takes time to assimilate and appreciate. It is, I believe, a milestone in the improvisatory-compositional nexuses we see coming together in this new century. The exceptional talents and sensitivities of Spontaneous River make that so, as does the imaginative and executional excellence of Jason Kao Hwang. Let there be more of this! In the meantime, do not miss this music if you want to have a feeling for, and appreciation of what's going on in the current decade!
Posted by Grego Applegate Edwards at 5:31 AM