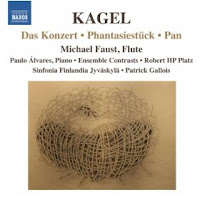 I first came to appreciate the music of Mauricio Kagel (1931-2008) through his 1971 Acoustica and other pieces for unusual musical instruments and sound generating combinations. Though this was a period of his music that was more frankly experimental, there is of course a pre- and post-Acoustica aspect of his music. The works of the later '70s on I'll admit I have not listened to in any detail. So when a CD of his later Works for Flute (Naxos 8.572635) presented itself to me I listened eagerly. It's Michael Faust on flute, Paulo Alvares and Robert HP Platz, piano, Ensemble Contrasts, and Sinfonia Finlandia Jyvaskyla under Patrick Gallois.

"Das Konzert" is, if you will, the blockbuster extravaganza. The flute part is mercurial, the orchestral parts dynamic and timbre-rich, the music generally high modernist in a refined sort of way. It's quite expressive and impressive as a flute concerto that ranks among the best of this current century so far.

"Phantasiestuck" in both versions is playful, filled with a sort of good humor, harmonically rather primal sometimes, yet quite modern sounding, especially in the larger ensemble version, almost neo-classical in the Stravinskian sense, and thoroughly enjoyable.

"Pan" is rather puckish, as one might expect, with an almost impressionistic and lighthearted aspect that makes it easy to hear. The piccolo part has definite brilliance.

Michael Faust excels in his interpretation of the solo parts, with a sure phrasing and bright-toned virtuosity. The supporting players are of the first rank and bring out their parts with a flourish.

It's a bit of a revelation to hear this aspect of Kagel. The music is not dumbed down yet has much that will be accessible to a wide audience. I am thankful to have it to hear regularly. Definitely recommended.