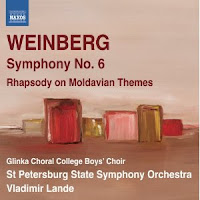 Mieczyslaw Weinberg (1919-1996) Russian-Polish-Jewish composer of the Soviet Era, wrote 26 symphonies as a part of his output, fell out of favor at the end of Stalin's regime, and after a time of rehabilitation in the post-Stalin era was more or less forgotten in his last years.

This in part explains why his music was not exported to the West in a consistent way. Only now has he begun to be recognized as a symphonist of importance.

How timely then the issue of his Symphony No. 6 and Rhapsody on Moldavian Themes by the St. Petersburg State Symphony Orchestra under Vladimir Lande (Naxos 8.572779).

The Rhapsody is a 15-minute work that brings much Slavic color into its concise form. It is a good prelude to the more ambitious, sprawling Sixth Symphony, which is scored for large orchestra and boys' choir.

Written in 1963, the 6th had a very positive reception from Shostakovich, whose 13th Symphony premiered a short time before Weinberg's. The two share certain affinities in thematic construction and overall sweep.

Three of the five movements make use of the boy's choir; the other two movements are orchestral only.

Much of the thematic material has a folk flavor to it, in part in ways that Prokofiev and Shostakovich utilize themes sometimes for grotesque ends, but also shows originality in the way it combines Jewish-Russian-Slavic roots with more abstract, purely symphonic elements in the course of the symphony.

These things aside, the 6th is a work of great dynamism and charm, and the presence of the boy's choir gives it a sort of youthful innocence to contrast with some of the more caustic, somber moments.

The performance is quite good and holds its own in comparison to others I have heard. Weinberg's Sixth should be enjoyed by anyone who follows and appreciates the 20th century composers of the Eastern Bloc. It most certainly has regenerated an interest in the composer for me. Get this one and enjoy!!