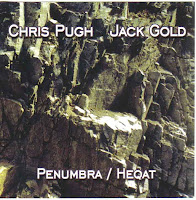 Today, music from Seattle. It's a split disk by composer guitarist Chris Pugh, drummer Jack Gold, and Trio Recherche. Penumbra/Heqat (Sol Disk 9406) divides between "Penumbra," an extended duo free improvisation between Pugh on a rather electric guitar and Gold on drums, and the avant concert work "Heqat", a Pugh composition performed by string trio.

What is interesting, first off, is the confluence between avant improv-rock-freedom and closely mapped-out avant concert music. The CD covers both as if a matter of course. We have as precedent key figures like Zappa and Zorn, who never shied away from moving in either direction or both directions at the same time as the spirit moved. And more and more composer-instrumentalists are doing the same lately (see my review on the Gapplegate Music blog on the latest music by Wadada Leo Smith, for example, a particularly moving and excellent new musical example).

There are musicians who have grown up and lived with all manner of genres and hear music bi-stylistically, so to speak. I am one, which is why I cover new music/classical, jazz and rock on the three different blogs and find the overlaps of great interest.

In any event the guitar-drum duet is not distinguished by the technical prowess of Mr. Pugh on electric guitar but more by the sounds and ideas he puts forward freely. Jack Gold plays a dense barrage of arrhythmic drums for the first half, and he is very adept at his role. Chris Pugh develops motifs to repeat while working through a rock and avant vocabulary. The second half of the improvisation concentrates on quiet, non-pitched sounds and though this may be a bit overextended, it does afford contrast.

Then the CD switches gears to a string trio composed by Pugh, "Heqat", performed in concert by Trio Recherche. It has a piquant kind of Darmstadt feel to it, wide leaps, continually shifting string articulation techniques and an atonal-12-tonal sound. The performance is quite serviceable, the music is difficult and occasionally it sounds as if the mix is slightly off in parts, though this may be intentional as the less present string lines at those points have a reverberent quality, so perhaps they are filtered electronically and are meant to be in the background. It's a post-Webernian flurry of jagged musical events and it shows some definite compositional prowess in potentia if not totally in presentia. I would certainly want to hear more of Pugh's new music compositions if given the opportunity.

Penumbra/Heqat gives the listener two very different sides of what is going on today in the avant garde. It is by no means a perfect disk, but gives a fascinating glimpse of the promise of these young Turks for the close listener.